Tony Salvaro had innumerable fans during the 28 years he worked as an announcer at Chicago-area harness tracks, running the gamut from the $2 bettor to New York Yankees owner George Steinbrenner."Listen to the announcer!" the late Steinbrenner raved... 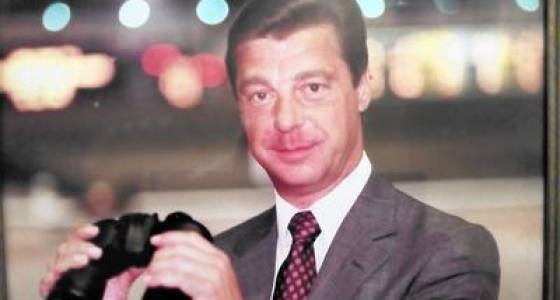 Tony Salvaro had innumerable fans during the 28 years he worked as an announcer at Chicago-area harness tracks, running the gamut from the $2 bettor to New York Yankees owner George Steinbrenner.

"Listen to the announcer!" the late Steinbrenner raved as he headed toward the winner's circle after Incredible Finale, a horse he co-owned, paced the fastest mile in Maywood Park history in winning the 1986 Windy City Pace. "He's excellent! You have an excitement at the racetrack you can't find anywhere else, and the announcer is conveying it."

Salvaro, 70, died on Feb. 10 at his Northwest Side home while watching a telecast of harness races at New Jersey's Meadowlands. He had suffered "a lot of medical problems" and had been on dialysis, said his son, Tony Salvaro Jr.

Among those impressed with his calls at the racetrack was Illinois Racing Board member Bob Schiewe, who began going to the races at Maywood with his father and grandfather when he was growing up in River Forest.

"His call of the races at Maywood are some of my best lifetime memories," Schiewe said. "I can hear Tony as if he called the races last night. He was a passionate fan of harness racing, and I think this was obvious to everyone who heard his call of the races.

"I used to own and co-own pacers and I enjoy watching the videos of their races every once in a while, and Tony's call is still very exciting to me."

Eleanor Flavin was the hostess at Maywood when her late father, Pat Flavin, was a co-owner of the track, and she too has fond memories of the personable and fun-loving track announcer.

"Tony was always so kind and gracious," she said. "He was always there when I needed something, welcoming everybody to Maywood Park and making them feel special. It was the same way when Mike Paradise and I had our racing show (on the cable TV station SportsVision). We were on a shoestring budget but he would go out of his way to do interviews for us.

Salvaro's career was interrupted when he suffered seizure caused by a brain aneurysm in 1997.

"They did the surgery at Northwestern Hospital and discovered he had three aneurysms," said Salvaro's sister, Patricia Dziadosz. "He couldn't speak. He was in intensive care and he had a ventilator. He was in the hospital for three months.

"His faith and sense of humor got him through. He regained his speech and his memory and recall were fine. A couple of weeks after he got out of the hospital he went to a wedding and then he went back to work at Maywood."

Salvaro continued announcing until 2001, when he retired because of ongoing health problems.

According to his sister, his love of harness racing dated back to his childhood and was inherited from their father, Vito Salvaro.

"Our father wasn't well-educated and he would ask Tony and my other brother, Angelo, to help him check the newspaper for stories," Dziadosz said. "As years passed he and Angelo would go to the track with Dad and they loved it. Tony would listen to Phil Georgeff. Then, Tony would come home and go to the basement with his make-believe microphone and little cassette player and he'd call races."

After graduating from high school, Salvaro gravitated to the racetrack and became a protege of the iconic announcer Georgeff, along with John Brokopp, who went on to become a track publicity director at Aurora Downs, Hawthorne Race Course and Sportsman's Park.

"My first job as a publicity director and Tony's first job as an announcer was at Aurora Downs in December 1973," Brokopp said. "At that time year-around racing wasn't legal in Cook County and Aurora Downs (in Kane County) and Balmoral Park (in Will County) would race from the first week in December until the third week in February.

"Tony was a debonair-looking guy — a Bobby Darin type, a sharp dresser with his hair always in place — and he was a funny guy with his self-deprecating humor. But his appearance belied who he really was; he lived a very private life at home with his mom and dad and little Tony. And when he turned on that microphone he was all professional."

From Aurora Downs, Salvaro moved to Maywood Park, where he worked for 22 years. In addition to track announcing and his TV work on SportsVision he did wrap-up shows on local TV and radio. He also co-owned a few standardbreds during the course of his career.

Not only was Salvaro a favorite of the fans — he was also popular with horsemen.

Very aware that Salvaro was a fanatic Cubs fan, owner-trainer Lavern Hostetler teasingly named one of his most promising young pacers Gosox. The horse went on to become an Illinois-bred champion. As a result, several times in announcing the races Salvaro would have to exclaim "…and here comes Gosox!"

Tony Salvaro Jr. said that his father "loved it big-time" watching the games on TV when the Cubs won the World Series last fall.

"My dad would come home from dialysis and try to keep his eyes open so he could watch the games to the end," he said.

Salvaro leaves no other immediate survivors.

Funeral services have been held.

Neil Milbert is a freelance reporter.