New Blackhawks winger Tomas Jurco didn't have the easiest time playing for the Red Wings.When he played under current Maple Leafs coach Ken Babcock, Jurco said Babcock wanted him to play a more physical game. Jurco is more of a speed and skill player. The... 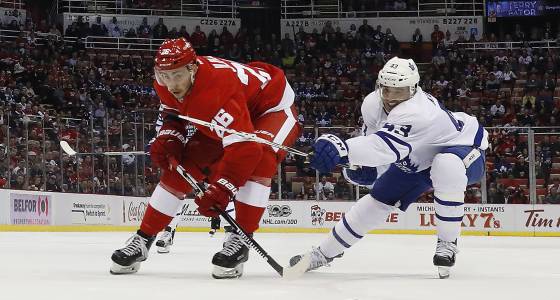 When he played under current Maple Leafs coach Ken Babcock, Jurco said Babcock wanted him to play a more physical game. Jurco is more of a speed and skill player.

The demands the Wings had for Jurco never quite meshed with his skill set over the last four seasons and so Jurco and general manager Ken Holland decided a trade was in the best interest of both parties.

Now Jurco is a Hawk and likely will make his debut Sunday night against the Blues after the Hawks traded a third-round pick to acquire him Friday.

"It has been a tough couple of years for me in Detroit, so I was talking to Ken Holland and we were discussing some options and this is another fresh start for me and I'm very excited for it …" Jurco said. "I wasn't progressing in the last year or so, so I think this is a great time to push my game to another level."

Jurco, who is from Slovakia, skated at Saturday's practice on a line with Marcus Kruger and fellow Slovak Marian Hossa. Jurco played on the 2014 Slovak Olympic team with Hossa and said he is also friends with Richard Panik, the Hawks' other winger from Slovakia.

Jurco is hoping his style is a good fit for the Hawks the way Panik's was when he came last season from the Maple Leafs.

"I had to change my game a little bit and this is the NHL. You have to do what you have to do to stay in the league," Jurco said. "This is all past for me, I'm really thankful to Detroit for starting up my career, but this is a new opportunity for me."