By Alexandra Petri Reince Priebus and Stephen Bannon definitely get along. Everything you have heard about their relationship, says Priebus, is wrong. If you have heard that they are slowly engaged in a battle to the death, that is definitely not true. That... 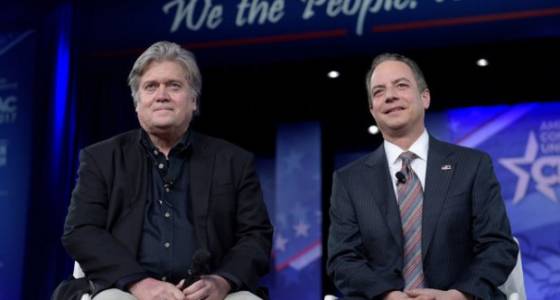 Reince Priebus and Stephen Bannon definitely get along. Everything you have heard about their relationship, says Priebus, is wrong. If you have heard that they are slowly engaged in a battle to the death, that is definitely not true. That is their, uh, belligerent chemistry. They are like brothers (Kim Jong Un and Kim Jong Nam), just regular brothers.

They are the best of friends, like Frog and Toad, or even Bert and Ernie, if you catch them on the right evening. They talk all night until they fall asleep, holding hands. This is what they told New York Magazine's Olivia Nuzzi:

"We talk a lot, pretty much all day long," Priebus said. "And then we communicate at night -"

"Until we fall asleep," Bannon interjected with a laugh.

Priebus cut in, "Until somebody falls asleep ... You fell asleep last night."

Also, they give each other back rubs.

They are like Kirk and Spock, except that the only people writing fan fiction about their relationship are the two of them, together, every time they speak to the media -- for instance, at the Conservative Political Action Conference, in conversation with Matt Schlapp.

Stephen hates it when people insult his good buddy, Reince. When his old employee Matt Boyle published an anti-Priebus story on Breitbart.com, a website that Bannon is deeply ashamed of, has nothing to do with and is definitely not speaking to now, he was INFURIATED and reportedly made a very strongly-worded phone call to yell at him. Nobody treats his Reince Priebus that way! His Reince is a cinnamon roll who must be protected at all costs. He did not leak the story. No way, no sir, no how! He definitely did not give Reince the nickname "Rancid." When would he have had time? They are talking to each other every minute of every day. They are holding hands right now, just to hold hands, not because that leaves one less hand free for stabbing in the back. They would never! They would stab one another in the front or not at all.

Really, this is a love story.

What do they love about each other? So, so many things. Priebus loves Bannon's clothes. "I love how many collars he wears," he told everyone at CPAC, batting gently at Bannon's collar. "Interesting look." Ha, ha, ha, ha!

If anything, they doth not protest enough.

CPAC showcased the exciting chemistry that fans of the Priebus-Bannon franchise have come to look forward to on each media outing. They love to laugh and touch. They are so comfortable with one another. More comfortable than anyone. Their friendship is as slouchy and comfortable as every garment that Bannon has ever put on his body. They are closer than any human beings have ever been, like Holmes and Watson, or a crocodile and a bird that lives in the crocodile's mouth and cleans its teeth.

They do not share a vision of nationalism based on a certain "culture," but they do share . . . an office, with a fireplace and comfy sofas.

They are different, as Bannon acknowledges, but that is just why they work so well together. They complement each other and compliment each other. Bannon is a pile of creepy nationalist conspiracy theories concealed under a big raincoat who made Breitbart the platform for the alt-right (his words, not mine), whereas Priebus is . . . a human man from the great state of Wisconsin. Why did Donald Trump win? Bannon says it is because America is bound by a certain "culture" and nationalism, in opposition to the media, which he kept cavalierly referring to as the "opposition party." Priebus says he talked to his neighbor in Kenosha, and his neighbor thought Trump was just great.

And they have so many nice things to say about each other! Kind of!

"He's very dogged," Priebus says, "incredibly loyal." Also "extremely consistent" and "someone that I work with every second of the day." Are these compliments? They sound like a plea for help. When I try to compliment people, I usually say things like "I cannot stop him" and "He will not change" and "He is like a Roomba that has gone feral, and I cannot escape him no matter how I try."

"Very important to have in the White House," Priebus says.

"I've been running a little hot on occasion," Bannon acknowledged, mildly. But he is not there to talk about his expansive vision for "deconstruction of the administrative state" or his enmity for the media, "the opposition party," or how excited he is to be invited to CPAC after being among the uninvited for so long.

No, he is there to offer mild, back-handed compliments to Reince Priebus. "Reince is indefatigable. . . He's always kind of steady. . . Reince is indefatigable." The man is NON-STOP! (I know that Stephen Bannon appreciates this reference, because he quipped during the same panel that the campaign was "outgunned, outmanned" and now we must burn all our "Hamilton" references and fumigate the house.)

Anyway, those sound like people who love the other person and are not waiting for the other party to blink. (Please blink, oh god, Reince Priebus just wants to go to bed, but what if Stephen Bannon does something when he is asleep? Stephen fall asleep please, oh, God, how many more years of this? Will Reince ever see Kenosha again?) Nothing like that. They are fine. Fine, and very much in love. There is no music to Reince Priebus's ears like the sweet sound of Stephen Bannon's voice, which he hears every day, all day from dawn until night. There is no smile that so warms the cockles of Stephen Bannon's heart like Reince Priebus's smile when Stephen does one of those classic things he does, like rail against the "corporate, globalist media" or praise Trump as the best rally speaker since William Jennings Bryan. In the chaos of the early days in the White House when no one knew what light switch to use, their hands brushed gently and they smiled. They do not need light. They have each other.

They are two different men, but their bond is unbreakable. They have tried. But when they threw it in the fire hoping to destroy it, like the One Ring, nothing happened. It is Mount Doom or nothing.