While it seems that Winn (Jeremy Jordan) has found his perfect match in Lyra (Tamzin Merchant), DEO’s IT whiz still has a lot of things to learn about his new alien lover.In a recent interview with Entertainment Weekly, Jordan said that Lyra is keeping... 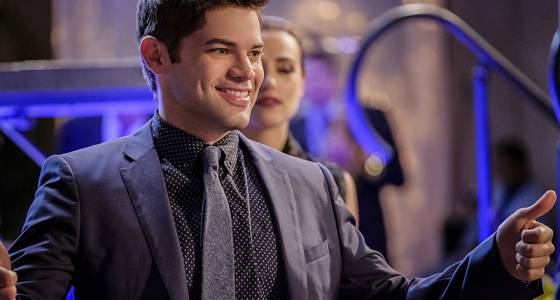 While it seems that Winn (Jeremy Jordan) has found his perfect match in Lyra (Tamzin Merchant), DEO’s IT whiz still has a lot of things to learn about his new alien lover.

In a recent interview with Entertainment Weekly, Jordan said that Lyra is keeping secrets from Winn. “In our world, strong-willed women and women who are powerful in their own ways tend to have other things going on, so we find out that there are secrets,” Jordan teased. “But for the first few episodes that we see Winn and Lyra, it’s more about discovering how their relationship fits into this new world that we’re discovering on ‘Supergirl.’”

Winn met Lyra for the first time in Season 2, episode 13, in which Lyra rescued poor Winn from a couple of male aliens bullying him in the bar. The two hit it off immediately after Lyra opened up about what happened to her once idyllic home planet Starhaven — which is something Winn is pretty familiar with. The two went out on a date and found out that both of them had been heartbroken a few times, so they decided to take their relationship slow.

In a separate interview with Entertainment Weekly, executive producer Andrew Kreisberg revealed that Lyra will eventually find out about Winn’s partnership with the Guardian (Mehcad Brooks), and at some point join the duo in their vigilante gig. “Winn, James, and Lyra have a really funny story in [episode] 18 too, where the three of them try crime fighting as a trio, which doesn’t necessarily go well,” Kreisberg said. “She kind of becomes the Yoko of the team.”

Both Jordan and Merchant have expressed excitement on Twitter about Winn and Lyra’s storyline for the rest of the season. See their tweets below: