Alex (Chyler Leigh) is going to learn more about Maggie’s (Floriana Lima) dating history in Season 2, episode 17 of “Supergirl.”In a recent interview with Entertainment Weekly, Leigh revealed that Alex will meet one of Maggie’s former lovers in the... 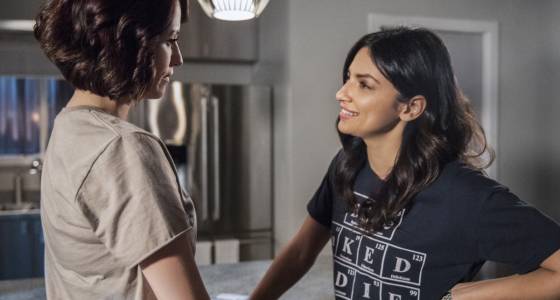 In a recent interview with Entertainment Weekly, Leigh revealed that Alex will meet one of Maggie’s former lovers in the upcoming episode directed by Kevin Smith.

“There’s a great moment in episode 17, Kevin Smith’s episode — who is probably the coolest person on the planet — where they have this moment that we run into one of Maggie’s exes,” Leigh told the news outlet. “Alex is kind of like, ‘Oh, let’s go chat her up.’ I think there’s profiling thing that’s going on.”

Apparently, Alex’s interest in Maggie’s previous relationship with her ex leads the DEO agent to discover her girlfriend’s rather dark past.

“Alex is, you know, she’s Alex. She finds out what really happened between them and it’s a much deeper story, a darker story,” Leigh teased. “It’s a lovely episode for Floriana, just learning more about Maggie’s background and what’s gone on in hers, and how it really does level the playing field between the both of them. So there’s great development in that.”

Whether or not Alex’s curiosity about Maggie’s ex causes a rift in their relationship, it seems that the episode will end very well for the lovebirds, as Leigh and Lima were photographed filming a smooch-fest for the episode outside a downtown Vancouver condominium last  Feb. 9.

According to YVRShoots, Smith directed the sequence with the crew applauding at various points during filming. In between kissing in front of cameras, Leigh and Lima also posed for photos with a group of “Sanvers” fans who were on set during the day. Check out the set photos below:

Alex (Chyler Leigh) runs into one of Maggie’s (Floriana Lima) exes in Season 2, episode 17 of “Supergirl.” Photo: The CW