Artem Anisimov's third-period goal lifted the Chicago Blackhawks to a 4-2 victory over the St. Louis Blues on Sunday night at the United Center. Jonathan Toews and Patrick Kane each had a goal and an assist and Tanner Kero also scored as the Hawks won their... 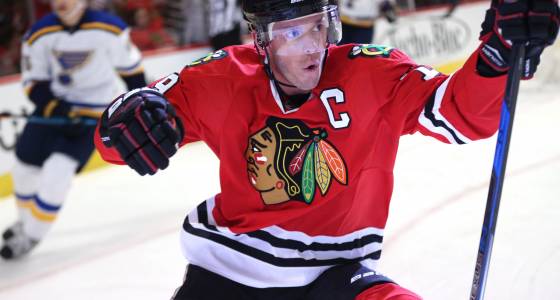 Artem Anisimov's third-period goal lifted the Chicago Blackhawks to a 4-2 victory over the St. Louis Blues on Sunday night at the United Center. Jonathan Toews and Patrick Kane each had a goal and an assist and Tanner Kero also scored as the Hawks won their fourth game in a row.

Scott Darling earned the win in goal for the Hawks, taking the net after No. 1 netminder Corey Crawford was sidelined with an illness.

Magnus Paajarvi and Alex Pietrangelo scored for the Blues. Jake Allen suffered the loss in goal.

1. Jonathan Toews: The captain netted his 16th goal of the season to start the scoring.

2. Scott Darling. Finished with 30 saves in the emergency start.

We had to start to limit the chances we were giving up against. We had shifts in their end especially through the second period when things were tied up but that’s a team that works hard and keeps things close. We don’t expect it’s going to be easy to pull away in a game like that. I think overall that was a pretty solid game. We seemed to finish hard and finish the right way. Nice to get a big goal by (Anisimov) and get the two points in 60 minutes instead of having to go to overtime." -- Toews

"We’re very confident in our team and that’s the way you want to be. You want to be excited to get going at this point in the season, leading into the playoffs and get that good feeling in the room. We’re excited about the way we’re playing." -- Darling

“I thought we had a great start to the game. I thought (Darling) was excellent all night long. It was a great stretch there in the last 10 minutes where we fight through some tough shifts, particularly the last couple of minutes in their end. Good win. You look at the nice plays on the goals. It was kind of a comparable ending to what the Outdoor Game was. It was tied and at about the same time where they scored, we scored. Obviously, it was a big two points for us." -- Hawks coach Joel Quenneville

"I thought we started okay but you could tell there were a couple times that we were not sharp mentally and a couple of those breakdowns obviously led to some good chances against. It’s too bad, because Jake (Allen) did everything he could to keep us in that game.” -- Blues coach Mike Yeo

“As the game went on, it felt like it was back to where we were. Obviously, you want to come away with a win here. This would have been a good one to come away with. I know teams haven’t had a lot of success coming out of the break; it would have been nice to break that trend. I thought we were up to the challenge and I think we did a lot of good things throughout the game.” -- Pietrangelo