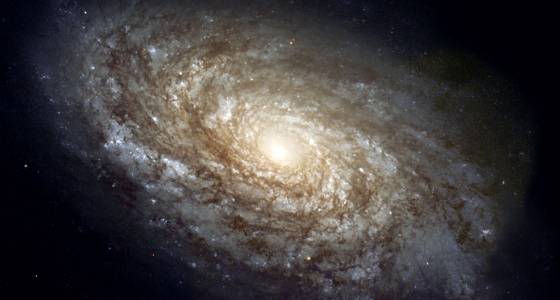 UGC 12591, also known as LEDA 71391, is situated in the westernmost part of the Pisces-Perseus Supercluster. It’s the fastest rotating galaxy known to man, according to a Harvard study, spinning at up to 1.2 million mph. The galaxy is also immense, weighing in at four times the mass of the Milky Way and several hundred billion times the mass of our sun.

Hubble’s photo is aiding astronomers in their quest to determine exactly how the galaxy came to be and whether it grew over time or collided with another galaxy.

Hubble has been regularly capturing images from deep space since it was launched in 1990. More than 1.3 million observations have been made from the telescope, which orbits above the atmosphere at 17,000 mph for an untarnished view of the universe. The telescope helped scientists discern the age of the universe, an estimated 14 billion years old, through its observations.

In September 2016, NASA released photos from Hubble of Jupiter’s moon Europa, kick-starting a search for possible life on the lunar planet. The images revealed the possibility of a subsurface ocean on Europa that could be capable of hosting life.

In another exciting discovery, NASA released photos in January of two combination spiral galaxies located over one billion light years away. The Hubble images captured the two galaxies, known as IRAS 14348-1447, merging together and destroying one other, emitting incredibly bright infrared energy.

Earlier in February, the Hubble telescope captured an image of a spiral galaxy named NGC 7640, a far smaller galaxy situated just 19 million light years from Earth inside of the Andromeda constellation.