Contractors were still checking the final details and crossing little things off the list, but the Oregon Zoo's brand new education center was all but complete as officials gave The Oregonian/OregonLive a peek behind the scenes ahead of the grand opening.... 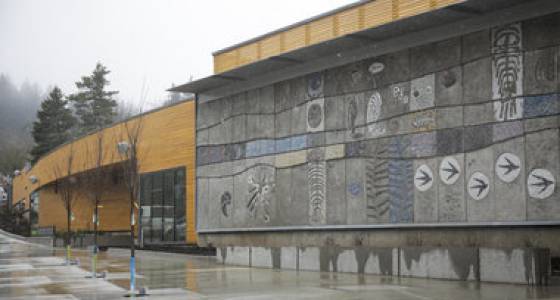 Contractors were still checking the final details and crossing little things off the list, but the Oregon Zoo's brand new education center was all but complete as officials gave The Oregonian/OregonLive a peek behind the scenes ahead of the grand opening.

The education center, which spans nearly two acres and includes roughly 19,000 square feet of building space, may seem large, but Grant Spickelmier, education curator at the zoo said the emphasis inside is on the opposite.

"The theme here is really that small things matter," he said. "People come to the zoo to see large animals like polar bears and elephants, but we really wanted to use this space to emphasize the importance of smaller things in the environment."

The largest public area is called the Nature Exploration Station, referred to as "NEST" by zoo officials. Educational exhibits line the outer edge of the room, which has soaring ceilings and exposed wood throughout. Particular attention was paid to sustainability during construction, said Brent Shelby, project manager at the zoo, and the 760 solar panels on the roof -- viewable through a periscope in a small alcove -- should produce as much, if not more, energy than the building uses over the course of a year.

On one end, windows give zoo-goers a view into one of the zoo's conservation labs where endangered western pond turtles are raised before they are released into the wild. Next to that is the Insect Zoo, which is home to some of the facilities smallest creatures including millipedes and spiders. The Insect Zoo's previous home was in a converted hot dog stand, Spickelmier said.

The building also houses a space for the zoo's teen volunteers, of which there are roughly 275 who contribute some 40,000 hours of service every year. The zoo also has a paid internship program specifically aimed at low-income students, many of whom participate in the Zoo Animal Presenter program.

In the past, teen volunteers only had a closet-like space and were scattered all over the zoo. Their new space, designed with their input, is a marked improvement over their previous digs with changing rooms, a central meeting space and whiteboards lining the walls.

"We think this space is crucial to training the next generation," Spickelmier said.

The new buildings -- there are actually two -- represent new opportunities for the zoo. A 150-person capacity conference center makes possible evening lectures and screenings of documentaries that previously would have been held off of the zoo grounds. Four classrooms vastly expand the zoo's teaching potential with layouts geared toward children of all ages -- from an early childhood room to a working lab meant to facilitate experiments by junior high and high school students.

The zoo partnered with roughly 30 organizations, including the U.S Fish and Wildlife Service, the Forestry Service and the Audubon Society of Portland, to include a wide variety of programming. The common theme through all of it, said Spickelmier, will be conservation and actions that can be taken toward that end.

"The exhibits only go so far," he said. "We're working hard to get programming that will inspire people to get outside and take some action. The more people get outside, the more they care about their environment."

The zoo will be hosting a ribbon cutting on Thursday for the education center's grand opening and the doors will open to the public this weekend, with rumors of an appearance by Smokey Bear, where zoo goers will be able to tour the entire space for themselves.