Should Jeff Sessions Recuse Himself From Russian Investigation? White House Says It's Too Early

UPDATE: 2:30 p.m. EST — President Donald Trump on Sunday again complained about the focus on Russian wrongdoing, calling it "fake news put out by the Dems."Original storyThe White House said Sunday calls are premature for the recusal of Attorney General... 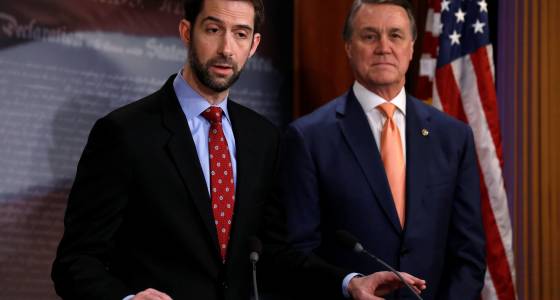 UPDATE: 2:30 p.m. EST — President Donald Trump on Sunday again complained about the focus on Russian wrongdoing, calling it "fake news put out by the Dems."

The White House said Sunday calls are premature for the recusal of Attorney General Jeff Sessions in the Justice Department investigation of Russian meddling in the 2016 U.S. presidential election, but key Republicans said it may be time for an independent investigation.

White House spokeswoman Sarah Huckabee Sanders said the process needs to play out before Sessions recuses himself, including a congressional investigation.

U.S. intelligence agencies concluded Russia was behind the hacking of the Democratic National Committee and the leaking of those emails to WikiLeaks in a bid to help Donald Trump get elected president. European countries now have express worry Russia will put the same stunts on them.

Also under investigation is whether Trump’s campaign had regular contact with Russian officials, something Trump has denied.

The administration has been more focused on how the stories got to the press rather than the substance of the allegations.

“We're confident whatever review that Congress wants to do, I think that's the first step. If they want to take that on, which there are two committees that are currently doing that, we're extremely confident that, whatever review, they're all going to come to the same conclusion — that we had no involvement in this,” Sanders told ABC’s “This Week.”

But Rep. Darrell Issa, R-Calif., former chairman of the House Oversight and Government Reform Committee, Friday called for Sessions to step aside and allow a special prosecutor to investigate the issue.

“You cannot have somebody, a friend of mine, Jeff Sessions, who was on the campaign and who is an appointee [investigate the allegations]. You're going to need to use the special prosecutors statute and office to take not just to recuse — that's — you can't just give it to your deputy. That's another political appointee,” Issa said on HBO’s “Real Time with Bill Maher.”

Several other Republicans, including Sen. John McCain, R-Ariz., and Sen. Lindsey Graham, R-S.C., have called for the creation of a special committee to investigate the allegations.

"I wasn't saying that he shouldn't recuse himself or that he should," Sanders countered. "My point is I don't think we're there yet. Let's work through this process."

Democrats have been clamoring for a special prosecutor to be appointed.

House Minority Leader Nancy Pelosi, D-Calif., noted on “This Week” that the law requires Sessions to step aside because of his ties to the Trump campaign.

Sen. Tom Cotton, R-Ark., however, said it’s too soon to be thinking about a special prosecutor.

"I think that's way, way getting ahead of ourselves here. There's no allegations of any crime occurring, there's not even an indication that there's criminal investigations underway by the FBI as opposed to counterintelligence investigations, which the FBI conducts all the time," he said on NBC’s “Meet the Press.”

Former CIA Director John Brennan lashed out at the administration for intimating he had leaked word of former national security adviser Michael Flynn’s contacts with Russian Ambassador Sergey Kislyak during the transition.

Brennan told CBS’s “Face the Nation” it was “very unhelpful to make allegations of who is responsible for these leaks,” adding that if anyone thinks he was the leaker, they’re “dead wrong.”