Seven Baltimore Police officers who were part of a high-profile gun unit were arrested Wednesday after being indicted in U.S. District Court on racketeering charges — allegations that throw into question scores of the prolific unit's cases. Their alleged... 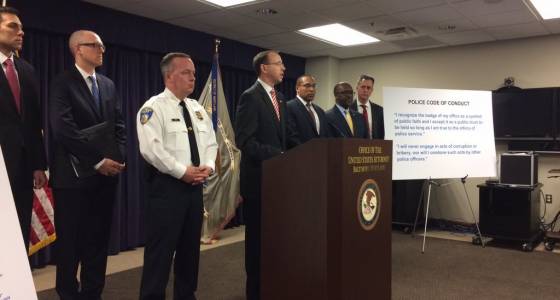 Seven Baltimore Police officers who were part of a high-profile gun unit were arrested Wednesday after being indicted in U.S. District Court on racketeering charges — allegations that throw into question scores of the prolific unit's cases.

Their alleged crimes include shaking down citizens, filing false court paperwork and making fraudulent overtime claims, all of which took place during a time when the Police Department was under scrutiny by the Justice Department for widespread civil rights violations.

One of the officers was also charged in a separate indictment with being part of a drug organization and tipping them off to investigations.

Maryland U.S. Attorney Rod Rosenstein said the investigation of the officers began about a year ago as the Drug Enforcement Administration was investigating the drug organization. It eventually involved electronic surveillance — including a recording device placed in a Baltimore Police vehicle.

The officers charged were identified as Momodu Gondo, 34; Evodio Hendrix, 32; Daniel Hersl, 47; Wayne Jenkins, 36; Jemell Rayam, 36; Marcus Taylor, 30; and Maurice Ward, 36. All seven officers were charged in a racketeering indictment, and Gondo was charged in a separate drug case along with five non-police officers.

Rosenstein said the officers were "involved in a pernicious conspiracy scheme" that he said "tarnishes the reputation of all police officers."

"These defendants were allegedly involved in stopping people who had not committed crimes, and not only seizing money but pocketing it," he said. "These are really robberies by people wearing police uniforms."

Baltimore State's Attorney Marilyn Mosby, whose office was not involved in the investigation, said the indictment "confirms the inherent difficulties with the BPD investigating itself" and said it would have "pervasive implications on numerous active investigations and pending cases."

Some of the officers had been long dogged by accusations of wrongdoing and excessive force. In 2009 members of the city's delegation had called for a federal investigation into Rayam after he was involved in three shootings over the course of two years, while the city has settled multiple lawsuits involving Hersl.

"The majority of these officers have been known to my attorneys as having significant credibility issues and we have aggressively been pursuing personnel records to be able to highlight the issues with their credibility on the force," Baltimore Deputy Public Defender Natalie Finegar said.

As recently as October, their unit was being praised by the department in an internal newsletter for their effectiveness in getting guns off the street. Over the course of less than 11 months last year, the unit made more than 110 gun arrests, according to a feature in a department newsletter.

Davis, who has touted increased gun arrests as a major part of his strategy to reduce crime in the city, said the indictments were embarrassing for the department, but also part of its ongoing efforts to root out bad actors and achieve reform. He said officers who engage in misconduct are "pretty savvy" and "know the criminal justice system."

"They're not easy investigations," Davis said. "It takes awhile to get there. Today, we're there."

In one incident in September, the officers stopped someone leaving a storage facility and said they had a warrant to search his storage unit. They did not, authorities said. Hersl, Jenkins and Rayam then took a sock containing $4,800 and removed $2,000 and gave the rest back. Rayam was recorded telling Gondo that he had "taxed" the man.

"He won't say nothing," Rayam was recorded saying.

A month earlier, they pulled over and detained a man, taking drugs and $1,700 from him. No incident report was prepared regarding the stop. In another incident in July 2016, they are alleged to have stolen $70,000 and divided the money up.

The court documents allege the officers alerted each other to potential investigations into their activities, coaching one another to give false testimony to internal affairs investigators, and turned off their body cameras to avoid recording their encounters.

"So basically you were never here," Rayam allegedly said, describing an incident in which Gondo turned off his camera during an incident when Jenkins was fighting with a civilian and hit a phone out of someone's hand.

The alleged criminal activity occurred throughout 2016, a time when the Baltimore Police Department was under investigation by the U.S. Department of Justice. The Justice Department released a scathing report in August that found the department routinely violated individuals' constitutional rights by conducting unlawful stops and using excessive force, among other problems. The report found those practices overwhelmingly affected residents of poor, predominantly black neighborhoods.

In January, the Justice Department and Baltimore reached a consent decree agreement outlining sweeping reforms to the department. That agreement is pending in U.S. District Court, where a judge must approve it if it is to become binding.

"We wouldn't be under a consent decree if we didn't have issues. We have issues," Davis said.

Meanwhile, the officers work remained celebrated in the agency. Lt. Chris O'Ree wrote in the department newsletter that the officers' seizure of 132 guns in a 10 1/2 month period was "no small task."

"Their relentless pursuit to make our streets safer by removing guns and arresting the right people for the right reasons has made our City safer."

Other information alleged the officers filed for overtime they didn't work during the same time period. On one day in July 2016, one of the officers allegedly told another about being in the poker room at the Maryland Live Casino in Anne Arundel County. The second officer said he was going to get a drink. Both allegedly filed for overtime that day.

In a statement issued Wednesday, police union president Gene S. Ryan said, "We are very disturbed over the charges filed against our members by the U.S. Attorney today. These officers are entitled to due process and a fair trial in accordance with the Constitution and the laws of our state. It would be inappropriate for me to make any further comment until the charges leveled against these officers are finally resolved."

"These seven police officers acted disgracefully, they betrayed the trust we have and are trying to build upon with our community at a very sensitive time in our city's history," Davis said. "They acted in a manner that betrayed their fellow police officers. I've said on more than one occasion: good cops hate to work with bad cops."