Billionaire philanthropist and Microsoft Corp. co-founder Bill Gates held his fifth “Ask Me Anything,” or “AMA,” session on Reddit Monday afternoon, using the handle “thisisbillgates” and giving fellow Redditors his input on everything from artificial... 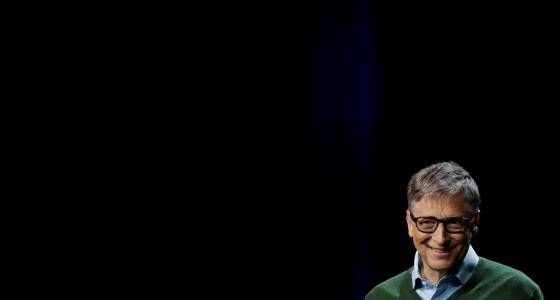 Billionaire philanthropist and Microsoft Corp. co-founder Bill Gates held his fifth “Ask Me Anything,” or “AMA,” session on Reddit Monday afternoon, using the handle “thisisbillgates” and giving fellow Redditors his input on everything from artificial intelligence to healthcare.  Read on for the highlights.

On fake news and getting out of your bubble

“I felt sure that allowing anyone to publish information and making it easy to find would enhance democracy and the overall quality of political debate,” he wrote, adding he was concerned about the “partitioning” of political opinions. “It would seem strange to have to force people to look at ideas they disagree with so that probably isn't the solution. We don't want to get to where American politics partitions people into isolated groups.”

“The big milestone is when computers can read and understand information like humans do,” Gates said. “There is a lot of work going on in this field — Google, Microsoft, Facebook, academia. Right now computers don't know how to represent knowledge, so they can't read a textbook and pass a test.”

He also stressed the importance of pioneering new vaccines for the world’s most deadly viruses: “We need a vaccine for HIV, malaria and [tuberculosis], and I hope we have them in the next 10 to 15 years.”

On whether he wears a disguise to “just walk around incognito”

“I sometimes wear a hat,” he said. “For example, when I did college tours with my son, I wanted the focus to be totally on him. A lot less people recognize me when I have a hat on, or else they realize I am trying to be incognito.”

Still, he added, those who do recognize him in public “are super nice, so I don't feel it is a burden to be noticed most of the time.”

On keeping artificial intelligence from wiping out humanity

The engineers of the first “strong AI,” Gates said, “have the right values” and can’t form “just one group way out in front of others.” He added that he was cheered to see the question posed, and to see people and corporations, such as Google, taking it seriously.

On learning how to be curious

“I think having parents and teachers reinforce your curiosity and explain what they are fascinated with makes a big difference,” Gates wrote. “A lot of people lose their curiosity as they get older, which is a shame. One thing that helps nowadays is that if you get confused about something, it is easier than ever to find an article or video to make things clear.”

On the limits of money in philanthropy

“Philanthropy is small as a part of the overall economy, so it can't do things like fund healthcare or education for everyone,” he said, adding that his charity, the Bill and Melinda Gates Foundation, which he manages with his wife, has faced difficulties in developing countries under “weak governance.” “Government and the private sector are the big players so philanthropy has to be more innovative and fund pilot programs to help the other sectors.”

On tech and healthcare

Technology, he wrote, “is super important to improve our healthcare system … to reduce chronic disease, but if we don't do better, health costs will squeeze out spending on all other government functions.”

On the welfare concept of universal basic income

“Over time, countries will be rich enough to do this,” Gates wrote. “However, we still have a lot of work that should be done — helping older people, helping kids with special needs, having more adults helping in education. Even the U.S. isn't rich enough to allow people not to work.”

On his greatest achievement

“Although the foundation work is super promising and will be the biggest thing over the decades ahead, I still think the chance to be part of the software revolution empowering people was the biggest thing I have gotten to do,” Gates wrote. “Right now I am very focused on making sure we successfully eradicate polio — that will be amazing if we do it — as good as shipping even the best software product.”

On his favorite sandwich