There's a good reason why Sen. Marco Rubio has been harder to find than Amelia Earhart.6 Months Ago6 Months Ago4 Months AgoHis feelings are hurt. Don't you feel just awful?The Judge Crater of the Senate has been AWOL from his ungrateful constituents for... 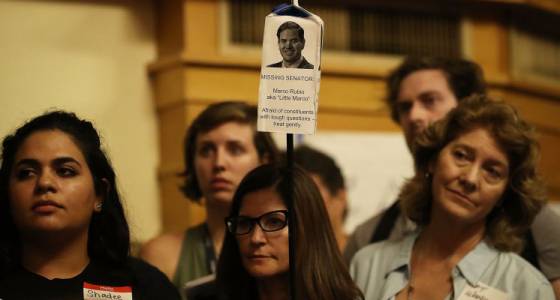 There's a good reason why Sen. Marco Rubio has been harder to find than Amelia Earhart.

His feelings are hurt. Don't you feel just awful?

The Judge Crater of the Senate has been AWOL from his ungrateful constituents for quite a while. It seems the senator is annoyed that the legions of people demonstrating in front of his offices across the state — who are critical of repealing the Affordable Care Act, President Donald Trump's Muslim travel ban and a number of controversial Cabinet appointments — had the audacity to request a face-to-face meeting for Rubio to explain himself.

Rubio, R-Why Is Everybody Always Picking On Me?, has become more reclusive than Thomas Pynchon to avoid meeting with those icky members of the public, otherwise known as voters.

Last week, minions in the employ of the Blue Boy of the Beltway announced the senator would be unavailable to attend any Florida town hall meetings during a congressional recess because his vital presence was required in Europe for all manner of highfalutin consultations with defense and intelligence officials. No doubt European security comes to a grinding standstill without the sage advice and counsel from Rubio, R-Duck and Cover.

Yet by midweek, the Zephyr of the Senate was back in Miami on his way to an unannounced meeting at Jackson Memorial Hospital and doing his level best to skulk away from a protester. Harper Lee was more accessible.

Finally, Rubio emerged from his bunker long enough to tell a Miami television station the reason he is avoiding town hall sessions with Floridians as if they had cooties is because the meetings "are designed to heckle and scream at me" in front of cameras. Oh, and many of the naysayers are (gulp) "liberal," too.

Being heckled and screamed at is an intrinsic part of the job of holding elective office. But it seems the Sun God of the Senate will only deign to lend his presence to a public gathering if Floridians swear to a kind of Manchurian Candidate pledge that Rubio "is the kindest, bravest, warmest, most wonderful human being I have ever known in my life."

So the same chap who just a year ago was flitting about the country trying to pass off his Sequoia-esqe presidential timber as just the man-jack to stare down the villainous Vladimir Putin is now stiffing voters in his home state because they might give him the stink-eye?

Do you get the impression had he been elected president, Marco Rubio, R-Brave, Brave Sir Robin, would have turned into a whimpering pile of goo the first time Germany's Angela Merkel cast a disapproving glare in his general direction?

Plenty of other Republicans have manned up and subjected themselves to often raucous town hall meetings. To their credit, Florida U.S. House Republicans such as Gus Bilirakis of Palm Harbor, Dennis Ross of Lakeland and Daniel Webster of Clermont have attended town hall sessions and endured frequent and vocal criticism. It surely wasn't much fun for them. But hearing from constituents, even those who might think you're a complete dope, is just as much an obligation for any elected official as basking in all the pats on the back from supporters.

Even Senate Majority Leader Mitch McConnell and fellow Republican Sens. Tom Cotton of Arkansas and Charles Grassley of Iowa have spent hours in the same room with those who disagree with them — with cameras rolling to capture all the cacophonous dissent.

But not Marco Rubio, R-The Invisible Man, who has deluded himself into thinking if he simply hides from his detractors everyone will forget his disdain for accountability, transparency and availability. But the issue of Rubio, R-Run Away! Run Away!, regarding his constituents as if they are pariahs won't go away.

Footage of town hall participants addressing cardboard cutouts of the senator or empty suits draped across a chair will live on. And the longer Rubio remains in the shadows, the louder the protests will grow.

There's a cardinal rule in public relations. When bad news happens, get out in front of it, talk it to death, answer all the questions, put up with all the catcalls and you will at least get credit and some respect for standing up and taking responsibility.

Rubio's constituents aren't asking for much. Or maybe simply showing up is a bridge too far for this profile in polenta.