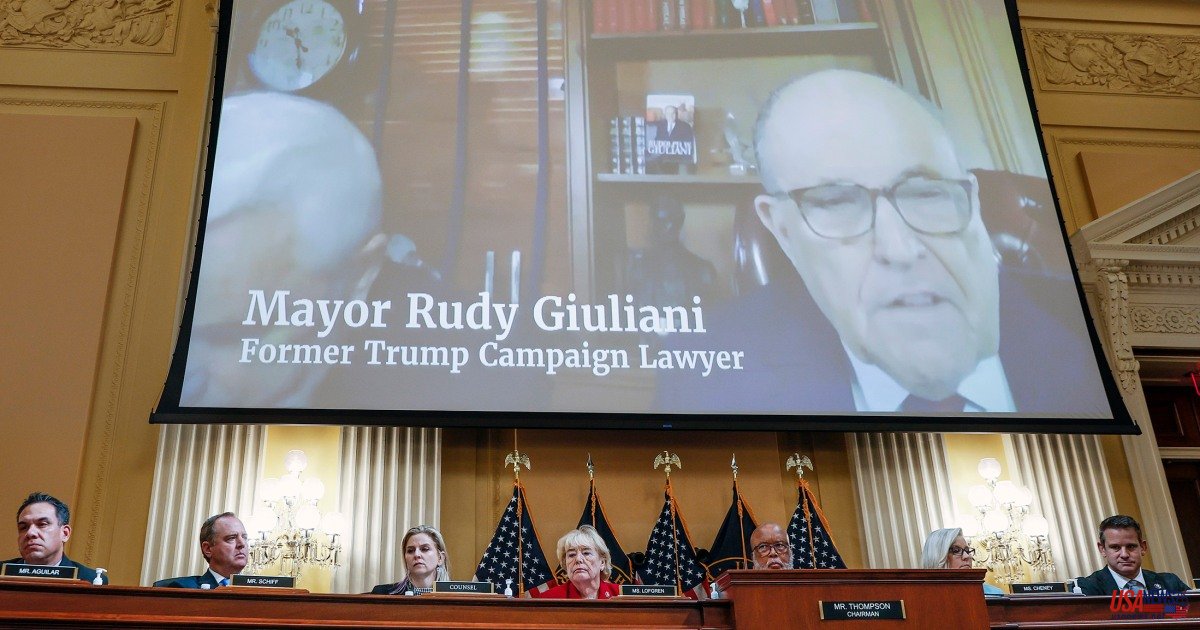 Rudy Giuliani denied Tuesday being drunk when he asked former President Donald Trump for victory. He said that he was "disgusted by Trump aides" who had testified differently before the Jan. 6 committee.

Giuliani tweeted, "I REFUSED ALL alcohol that evening," in a pair.

Jason Miller and Bill Stepien testified that the former New York City mayor was drunk when he asked to speak with the president as election results were being reported on Monday. They also said that Trump should declare victory.

Miller stated that Miller believed the mayor was intoxicated.

Giuliani tweeted that he was "disgusted" and "outraged by the outright lie" of Miller and Stepien. His last name was misspelled in the tweet.

He said that the pair were trying get back at him for berate them about not being prepared to fight his many baseless and debunked claims of widespread voter fraud.

Giuliani tweeted, "I was upset they weren't prepared for the massive cheating [as well as other lawyers surrounding the President]".

"Is it false testimony from Miller & Steppien because they yelled at me? They are being paid to lie? He continued.

Miller and Stepien's attorney did not respond immediately to our requests for comment.

Stepien was originally scheduled to appear in person at Monday's hearing, but he was forced to leave because his wife was still in labor.

Giuliani is well-known for his love of alcohol, but he has denied being an alcoholic. Scotch is my favorite spirit. It's a must. I love all the malts. Part of it is cigars. I love cigars with them. He told New York magazine that he is a partyer.

Robert Costello, Giuliani's lawyer, said to NBC News that he never asked his client about the drinking allegations he made during the lengthy closed-door interview last month.

Giuliani tweeted Tuesday that he had soda for election night.

Miller and Stepien testified that they had intercepted Giuliani, who was trying to reach Trump at the White House.

Miller stated that Mayor Giuliani said, "We won it, they're taking it from us. Where'd all the ballots come from. We need to go and say that we won. And, basically, anyone who disagreed with that position was weak."

Giuliani was eventually able to reach Trump and informed the panel that he had spoken to him "several times" during the night.

Both Miller and Stepien testified that they had urged President Trump to delay declaring victory. Stepien stated that it was too soon to make a proclamation such as that.

Trump adopted the Giuliani position after he spoke out in the hours following the close of the polls.