February brought with it the first solar eclipse of 2017. Sunday’s annular solar eclipse will only be visible in certain parts of the world, but the “ring of fire” phenomenon shouldn’t be missed.As long as the weather remains fairly cloudless, the... 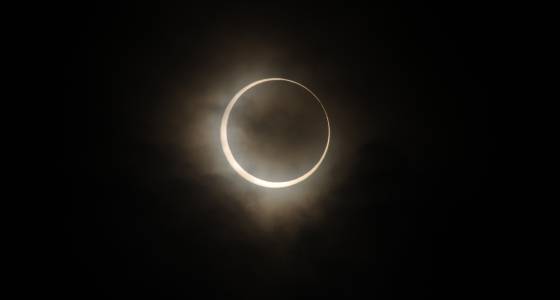 February brought with it the first solar eclipse of 2017. Sunday’s annular solar eclipse will only be visible in certain parts of the world, but the “ring of fire” phenomenon shouldn’t be missed.

As long as the weather remains fairly cloudless, the eclipse will be clearest along a narrow path from the southern tip of South America to Africa as well as much of Antarctica. The eclipse is set to begin at the southern tip of South America over Chile before passing over Argentina and traveling over the Atlantic Ocean to Africa. NASA published a map showing where in the world the solar eclipse will be visible.

A solar eclipse occurs when the moon passes between the earth and the sun, blocking out much or all of the light. Sunday’s eclipse is known as a “ring of fire” due to the orb of sunlight visible around the moon during the eclipse’s peak, a product of the moon’s positioning. The moon will not be at its closest point to earth, making it appear smaller and unable to block out all of the sun. At its peak, the eclipse will last a mere minute and 22 seconds.

Sunday’s ring of fire is the first of two eclipses set to occur in 2017. The first total solar eclipse over the continental United States in nearly 40 years will occur in August, dubbed both the “Transcontinental Eclipse” and the “Great American Eclipse.” Unlike Sunday’s, August’s eclipse will be visible best in the continental U.S.

For those who are in one of the many places where the eclipse won’t be visible, or who don’t want to make a homemade projector to safely view the eclipse, it will be live streamed by Slooh through a number of different cameras around the world.