Richard Spencer, a white supremacist and the director of the National Policy Institute, has made quite a few headlines in the past few months. He was kicked out of the Conservative Political Action Conference Thursday. He tweeted his disdain about the... 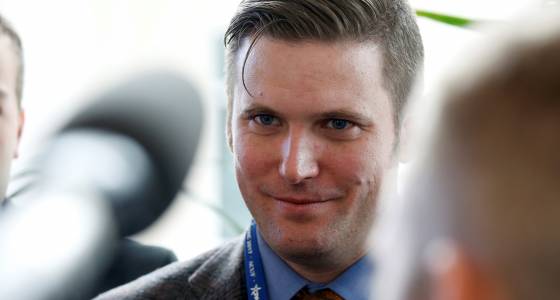 Richard Spencer, a white supremacist and the director of the National Policy Institute, has made quite a few headlines in the past few months. He was kicked out of the Conservative Political Action Conference Thursday. He tweeted his disdain about the fact that there was a mosque in in Quebec, which he called “one of North America’s most beautiful cities,” after a January attack on the mosque that left six dead. And he was punched in the face while being interviewed in Washington, D.C., on President Donald Trump’s Inauguration Day.

But Spencer has been speaking about his ideas on race long before last year, and in 2008 he coined the term alternative right — a phrase that has been shortened to alt-right and has become a catch-all for extremist conservative ideologies.

Listed here are quotes from Spencer where he explains his views on race, immigration, Trump and other topics in his own words.

On his ideal society:

"Our dream is a new society, an ethno-state that would be a gathering point for all Europeans. It would be a new society based on very different ideals than, say, the Declaration of Independence." — quoted in Vice, October 2013

“How can we build a White society, one that reflects the values and traditions of our people?” In the context of a world informed by multiculturalism, ‘anti-discrimination’ legislation, and White guilt, such a task is daunting to say the least…  Though there are certainly obstacles in our path, European-American communities can be organized in ways that are legal, moral, and, most important, effective.” — description of video that has now been deleted, April 2013

“Racist isn’t a descriptive word. It’s a pejorative word. It is the equivalent of saying, ‘I don’t like you.’ ‘Racist’ is just a slur word. I think race is real, and I think race is important. And those two principles do not mean I want to harm someone or hate someone. But the notion that these people can be equal is not a scientific way of looking at it.” — quoted in the Flathead Beacon, November 2014

On white people in America:

“This country does belong to white people, culturally, politically, socially, everything. We defined what America is." — speech at Texas A&M, December 2016

“Islam — at its full flourishing … isn’t some peaceful denomination like Methodism or religion like Buddhism; Islam is a black flag. It is an expansive, domineering ideology, and one that is directed against Europe. In this way, Islam give non-Europeans a fighting spirit and integrates them into something much greater than themselves.” — interview with Europa Maxima, February 2017

"Immigration is a kind a proxy war — and maybe a last stand — for White Americans, who are undergoing a painful recognition that, unless dramatic action is taken, their grandchildren will live in a country that is alien and hostile." — National Press Insitute column, February 2014

“In thinking about immigration and migration, I could not care less whether someone filled out the paperwork correctly or passed a civics exam. I oppose the immigration of an African who waits his turn and genuinely ‘wants to be an American’; conversely, I would gladly accept thousands of ‘Swedish boat people’ who wash up on the shores.” — Radix Journal blog post, November 2015

“Martin Luther King Jr., a fraud and degenerate in his life, has become the symbol and cynosure of White Dispossession and the deconstruction of Occidental civilization. We must overcome!” — Radix Journal blog post, January 2014

“I don't support gay marriage; indeed, I find it to be unnatural in the deepest sense of that word…. Marriage must, indeed, be re-founded on a much more radical level than that imagined by the egalitarian ‘Religious Right’ and ‘Constitutionalists’; marriage must not merely be ‘between a man and woman’; the family must become an integral part of the health of our race — of our charge to birth a strong, intelligent, beautiful, and productive people.” — National Policy Institute column, June 2013

“The alt-right is deeply connected to Trumpian populism in intellectual, spiritual, and visceral ways — for, as everyone agrees, Trump’s victory was, at its root, a victory of identity politics.” — Radix Journal blog post, November 2016

“Trump has opened the door to nationalism in this country — not American nationalism but the white race. Once that door has fully swung open, you can’t close it.” — interview with Time Magazine, April 2016