Everyone’s favorite gang of former Amish misfits is coming back for another adventure on TLC with a brand new season of “Return To Amish,” premiering April 30. This time around though, it appears the drama may be at an all-time high for... 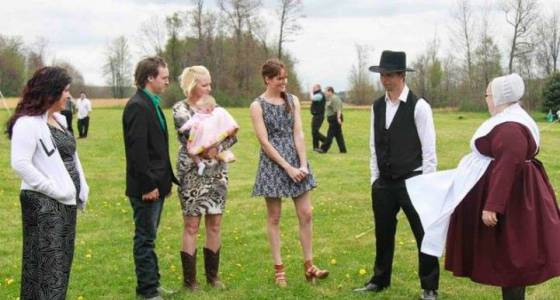 Everyone’s favorite gang of former Amish misfits is coming back for another adventure on TLC with a brand new season of “Return To Amish,” premiering April 30. This time around though, it appears the drama may be at an all-time high for the group.

A trailer for the season was released earlier this month, showing that each member of the group has their own major struggles this time around, and those individual problems also appear to be affecting their relationships as a whole. Here’s everything we know about the new season ahead of its premiere:

Kate Will Not Be On The New Season

Any fans who saw the new trailer may have had a moment where they watched and wondered if they had blinked and missed an appearance by Kate Stoltz. However, they didn’t, as the model/fashion designer who is based in New York City is genuinely not a part of the show’s fourth season. She confirmed on Twitter back in February that she is not only not on this season, but may not participate in the future at all, focusing more on her school work and her fashion career instead.

@laviniasienna no. I&#39;ve decided to focus on school and my work in design:)

Her lack of appearance doesn’t come as much of a surprise after she became very vocal before the show’s season three premiere last summer about how fake the show was. On social media, Kate blasted the producers and even accused them of “bullying” her and other cast members into saying things that they didn’t want to.

Mamma Mary May Be At Her Wildest

Every season has seen Mamma Mary Schmucker struggle with whether she wants to be Amish or English, though she has repeatedly said she wants to be Amish on her own terms. Unfortunately, her involvement with the show and other behaviors have led to her being shunned by the Amish community, and that struggle continues to affect her. Now, on the new season, after she’s denied the ability to attend her father’s funeral because she is shunned, she will be propelled to take on her most extreme behavior yet. However, she may be forced to try and reign some of it in when she’s warned that her actions could also lead to her husband Chester, who is still Amish, being shunned as well.

Sabrina Is Involved In A Custody Battle Again

Despite winning custody of her daughter Oakley at the end of season three, Sabrina is once again back in court trying to get her daughter back, after Children and Family Services took her yet again. According to a report by Starcasm last summer, Sabrina lost her daughter a second time. She reportedly revealed that her daughter was in the car with her when a friend died from a heart attack, which led to the new drama. Added to her stress this time around, she is pregnant with her second daughter, and doesn’t know if she'll be allowed to keep her. (Sabrina gave birth to the little girl, Arianna Grace, last Fall).

Jeremiah’s New Marriage May Be On The Rocks

Jeremiah shocked his co-stars in season 3 when he announced that he was getting married to a woman he met online named Carmela. However, in the trailer, it seems like the marriage is facing trouble, specifically as the two adjust to life together as a married couple. In addition, Camilla is concerned by the curse that was put on her affecting her.

There’s A Trip To Las Vegas

The gang has often traveled before for the show, with their initial premise involving their first trip to New York, and a trip to Florida in their second season. They’ve mainly stayed focused on Pennsylvania and New York the last few seasons, but thanks to Mamma Mary wanting to give Jeremiah and Carmela a proper honeymoon, it looks like the whole gang has packed up and headed to Sin City—though of course, the new location could lead to many more problems on the surface.