Republicans, stand your ground on Obamacare; America's greatest threat: Letters to the editor

We're ready to sacrifice: Regarding "PERS fix won't come until schools 'go off the cliff'" (Feb. 18), I was curious as to why bankruptcy was not considered to be a potential solution. Stockton, Calif., Central Falls, R.I., and Detroit are three... 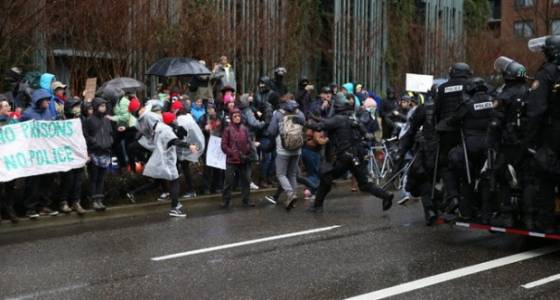 We're ready to sacrifice: Regarding "PERS fix won't come until schools 'go off the cliff'" (Feb. 18), I was curious as to why bankruptcy was not considered to be a potential solution. Stockton, Calif., Central Falls, R.I., and Detroit are three municipalities that recently declared Chapter 9 bankruptcy due to runaway pension costs. Federal bankruptcy judges ruled in each case that public pensions and other post-employment benefits could be cut, even where a state's constitution protected these benefits. This is because federal bankruptcy law supersedes state law.

As a result, retirees' pensions were reduced in Central Falls and Detroit. Stockton elected not to cut pensions, which would presumably have affected the decision makers, and I understand they are now facing a possible second bankruptcy as a result. Perhaps an "expert" could opine on this so that citizens can more fully understand this option.

After all, we are facing the untenable specter of schools and other services "falling off the cliff." Drastic times require drastic measures. As a footnote, my wife is a Tier One employee very near retirement, and we are prepared to be part of the solution (lower than promised retirement benefits) provided others, including existing retirees, are required to shoulder their share of the burden.

Focus on Obamacare repeal: I wanted to remind the Republicans of the tremendous job ahead of them, like fighting against the blockades that the Democrats are throwing in the face of everything President Trump is trying to accomplish.

Please, continue to have the moral conviction to stand your ground when it comes time to repeal Obamacare. We all know just what a disaster Obamacare is and has been since its inception! A fresh start is needed as it cannot be fixed.

Once Obamacare is repealed, we need to urge Congress to pass a second budget for fiscal year 2018 that lowers spending levels and then debate and pass a series of conservative, free-market healthcare reforms that enact consumer choice, strengthen the doctor-patient relationship and lower costs.

This two budget strategy will ensure that momentum for Obamacare repeal does not stall. It also provides ample time for individuals who have insurance through the Obamacare exchanges to transition back to the individual market without losing coverage. The American people are so close to taking back their healthcare. Our Republican leaders in Congress have one last chance. There are no more excuses.

The Trump administration denies global warming and is moving to make the problem worse. So it is up to all of us - indivudals, cities, counties and states to fight extra hard to rein in the problem.

Oregon lawmakers should prioritize legislation that cuts greenhouse gas pollution. Polluters should pay for the cost of the pollution they put into our air, just like we pay our trash collectors. Putting a price on carbon would bring us into line with what California and British Columbia, as well as several eastern states have done and would go a long way towards reducing our carbon footprint. Our legislators should also invest in a clean energy economy that helps Oregonians most threatened by climate change and a changing economy, such as low-income, rural, tribal, people of color and impacted workers.

Don't throw a fit: Things didn't go right for me eight years ago, and nothing went my way ever since. But I didn't go march and block traffic and break things. I had to go back to work.

We are not now more "polarized," as stories suggest. The only difference is the losers this time are the bigger cry babies. They just shout and stomp more -- and apparently have the extra time to do it.

One of the markers of the passage from childhood to adulthood is the understanding that you can't always get your way. My children's kindergarten teacher used to repeat to my children and the rest of the classroom, "You get what you get and you don't throw a fit." What I have to say is, I do not feel bad for you at all. It could be a long time, but you'll survive, just as I had to. I have no sympathy for you. Now it's someone else's turn.