Rauner skips dinner with Trump in D.C., is 'in conversations' with administration about violence

Republican Gov. Bruce Rauner kept his distance from President Donald Trump during a weekend visit to Washington, D.C., where he participated in a gathering of governors but didn't meet with the president and skipped a White House dinner that was attended... 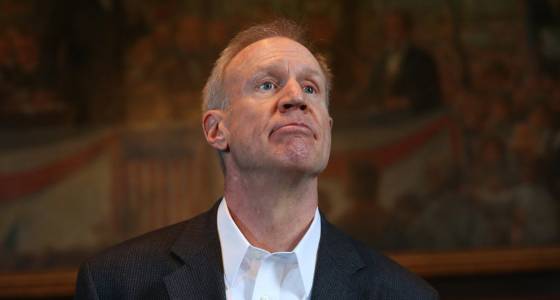 Republican Gov. Bruce Rauner kept his distance from President Donald Trump during a weekend visit to Washington, D.C., where he participated in a gathering of governors but didn't meet with the president and skipped a White House dinner that was attended by 46 other governors.

Rauner did not attend the National Governors Association dinner with the president, a fellow Republican, even as Trump has made a habit of bashing Chicago over its persistent problems with violent crime. The governor's response to the new president's statements about Chicago has been similar to his stance during the campaign: He has often avoided the topic, even veering away from uttering the president's name.

On Monday, the most Rauner revealed is he's been in "communication" with members of the "Trump administration" on "violence issues."

"The folks who are developing the policy — different from, you know, media discussion — the policy that we're actually going to implement, we're in conversations, I'm personally in conversations with folks developing that," Rauner told reporters Monday when asked to respond to the perception that he's been distancing himself from Trump.

The governor did not give specifics about what policy was being considered, nor did he say whom he was talking with from Trump's administration. Pressed on whether he was avoiding Trump, Rauner said he'd "meet with the president any time."

A longtime businessman and first-term politician like Trump, Rauner is up for re-election in 2018 in a state where the Republican president lost last year by a significant margin. That alone could make being close to Trump a politically tricky prospect.

Adding to that, Rauner spent the campaign keeping his distance from the presidential race and Trump's candidacy. The governor, for example, skipped the Republican National Convention where Trump was nominated. But that didn't stop Democrats from running ads connecting him to Trump, and it's likely they'll consider the same playbook in the upcoming campaign.

Trump says there are 2 Chicagos: One safe, one worse than the Middle East William Lee

Near the end of the roughly 80-minute event, Trump responded to a reporter's question...

Near the end of the roughly 80-minute event, Trump responded to a reporter's question...

Still, it is unusual for a governor to keep such a distance from a White House controlled by his own party. By contrast, Mayor Rahm Emanuel, a Democrat, met with Trump in December and traveled to Washington earlier this month for meetings with high-ranking officials on Trump's team, including Attorney General Jeff Sessions, Trump's senior adviser and son-in-law Jared Kushner, White House Chief of Staff Reince Priebus and Gary Cohn, a former Goldman Sachs executive who is the director of Trump's National Economic Council.

When asked since Trump's election, Rauner has pointed to a few friends in Trump's administration. He said Monday that he is "close personal friends" with two of Trump's "most senior advisers": former South Carolina Gov. Nikki Haley, now Trump's ambassador to the United Nations, and Jon Lerner, a pollster and longtime adviser to Haley.

"As I've mentioned, I've talked with him on the phone," Rauner said of Trump. "I have a very close, good working relationship with Vice President Pence, many leaders in the transition team."