A group demonstrated outside U.S. Rep. Randy Hultgren's district office in Campton Hills and demanded the Republican hold a town hall meeting. In response, the congressman said he is looking for opportunities to engage, though some opponents are following... 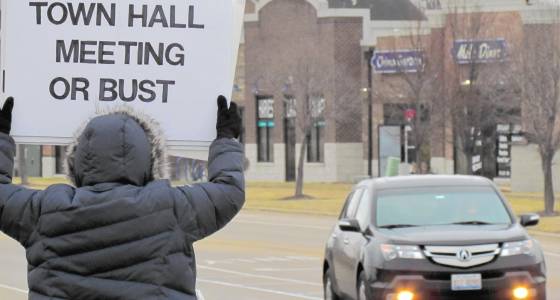 The protesters stood on the parkway of La Fox Road Thursday holding signs that read "Hultgren MIA" and "We the People will never go back." Some said they were regulars, while others said it was their first time. Some carried American flags and chanted "town hall meeting."

Gerry Becker's sign had the disclaimer, "I'm not paid!" as a reference to President Trump's criticism that demonstrations across the country were paid professionals.

Becker said she has called her congressman's office repeatedly and sent emails requesting that he hold a town hall meeting.

"I have done everything that I can," the Aurora woman said.

"It's his job to have town hall meetings. It's our voices that should be heard in Washington, D.C.," Becker said.

Marlene Petersen said she has called Hultgren's office weekly to find out when he will hold a town hall meeting.

"We are his constituents and he has an obligation to answer to us," she said.

Petersen, along with many others, said the Affordable Care Act is on her mind.

"We have heard the Republicans say they would replace the ACA with something better, but nothing's been done in the past six years. I don't want the ACA repealed. I want it fixed," the Crystal Lake woman said.

Hultgren, a Plano Republican, said he is always appreciative of getting input from constituents about their concerns, challenges and solutions.

Via email, Hultgren said he regularly invites people to speak with him by hosting coffees with the congressman, constituent 1-1 meetings, congressional conference calls and hundreds of meetings with local small businesses, hospitals, churches, municipalities, county governments, schools and nonprofit organizations.

"We are still fortunate in the 14th District in that we haven't forgotten that in the end we are all neighbors," the congressman said in an emailed statement.

Hultgren said he met with some constituents Feb. 10 at his office.

"While some constituents have communicated a frustration about their demands for a particular format of meeting, I have met individually with many of these same constituents one-on-one who have provided valuable input on various aspects of how best to repair the ACA," Hultgren said in an email.

"Unfortunately, there is an element of this group who are following a well-publicized 'playbook' on how best to disrupt and prevent a civil dialogue on important issues such as health care and veterans issues. That's not fair to all 14th District residents who deserve a respectful discussion," Hultgren said.

"In the coming weeks, I will continue to look for new ways to engage constituents in important civil dialogue that is necessary to cover these critical issues," Hultgren wrote.

Hundreds of protesters from a progressive group taking cues from a Tea Party playbook gathered at congressional offices across Illinois Thursday encouraging elected officials to push harder against President Donald Trump and Republicans.

"The Trump agenda and the GOP agenda is so appalling. We...

Hundreds of protesters from a progressive group taking cues from a Tea Party playbook gathered at congressional offices across Illinois Thursday encouraging elected officials to push harder against President Donald Trump and Republicans.

"The Trump agenda and the GOP agenda is so appalling. We...

At Thursday's protest, Petersen said she is worried Trump has a relationship with Russian leader Vladimir Putin. "We need an independent investigation," she said.

Hollis Apida said she was willing to stand in the plummeting cold temperatures and rain if it meant her voice would be heard, even if only by the passing motorists.

"No pain, no gain," the St. Charles woman said.

Apida held a placard with the image of Hultgren and a heading that read "Missing. Have you seen him?"

Apida's sign said that Hultgren was "wanted" for a town hall meeting and if anybody does see him they are asked to approach the congressman.

"How can the congressman represent us if he won't meet with us," she said. "I think he is afraid to talk with us because he doesn't have the answers that will satisfy his constituents." Rose Ann Porucznik of Naperville had a sign with a check list of Hultgren's voting record.

Porucznik said she is upset that the House supported a resolution to eliminate extended background checks for gun purchases by disabled Social Security recipients identified as being incapable to manage their own finances.

"I worked for the Social Security Administration for more than 40 years, and part of my job was to review cases and determine whether people were capable of handling their own affairs. Some of them could easily be talked out of their money or were severely in need of mental health care. Neither needs guns," she said.

"I do not understand the compulsion of the Republican Party to push that through so quickly," the Naperville woman said.

Beth Guerrero of Naperville held a sign that read, "Town Hall Meeting or Bust" that prompted motorists to honk their horns.

Hundreds of people gathered this week to voice their opinions and learn about national issues for what organizers called a town meeting with residents of several west suburban congressional districts.

Hundreds of people gathered this week to voice their opinions and learn about national issues for what organizers called a town meeting with residents of several west suburban congressional districts.

"I am angry that Hultgren works for us and refuses to meet with us," Guerrero said. Guerrero said she is worried about her 31-year old daughter who has multiple sclerosis, a disease of the central nervous system.

"If Republicans repeal the ACA my daughter will be without health care. It isn't enough to have access to health care - we need affordability," she said.

"I am not trying to berate the congressman. I would be respectful at a town hall meeting. I just want him to hear our concerns and know that we are watching his voting record," she said.

Susan Styer, who said this was her first time demonstrating, held a sign that read, "Putin No!"

"I am concerned that Putin has some involvement with our president," Styer said. "The thought of it keeps me up at night," the Geneva woman said.

"I can't believe the direction our country has taken. I would ask Hultgren to support an independent investigation into Putin," she said.

Jeannie Scown said some of constituents have received letters and acknowledged the congressmen met one-on-one with 10 constituents. But she would still prefer a town hall meeting.

"A person could come with a spouse but an individual could not bring a friend to meet with the congressman. Some constituents felt intimidated about having to meet with him alone," she said.

Scown said the call for a town hall meeting has been growing. "It's not the same core of people at these demonstrations, and that tells me there are a lot of people out there with us," she said.

"We do not want a town hall meeting that would turn into a screaming match - nothing would get done. We would take people out if we have to," she said.

Linda Girardi is a freelance reporter.