PROOF that liberal protesters are paid 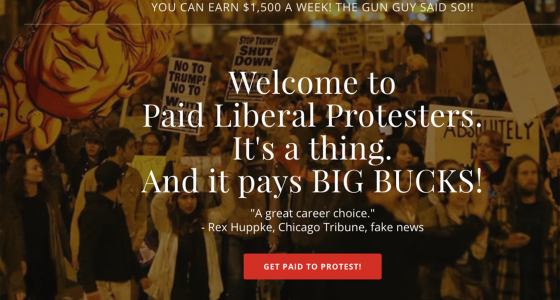 Republican lawmakers across the country have grown wary of holding town hall meetings with constituents.

Specifically, paid liberal protesters. (It's a well-known fact that all conservative protesters are volunteer and have legitimate gripes that must be heard.)

Most in the FAKE NEWS media will claim there's no such things as a paid liberal protester. They'll say people are simply turning out to express frustration over GOP policies and because they don't want to lose their health care and die.

But I'm here to tell you otherwise: Paid liberal protesters totally exist; it's an excellent career choice with surprisingly good benefits; and each protester earns $1,500 a week.

I know that last fact thanks to Wayne LaPierre, executive vice president of the National Rifle Association. During last week's Conservative Political Action Conference (it's like Burning Man for people who believe Burning Men should only be allowed to marry Burning Women), LaPierre railed against "full-time" liberal protesters, saying they earn "$1500 a week."

He said: "All share one thing in common: They're angry, they're militant and they're willing to engage in criminal acts to get what they want."

(That's three things in common, but who's counting.)

LaPierre, who earns a measly $1 million a year not caring about gun violence, is clearly upset that a long-haired leftist protester can earn $78,000 a year just for yelling and waving a stupid sign.

Sounds far-fetched, given that such a salary would be more than $20,000 over the median household income in the United States. But I'm telling you, it's the truth.

How do I know? Well, for starters, I read about it on paidliberalprotester.com, a website that I definitely did not create using $1.17 funneled to me via a vast network of leftist organizations funded by billionaire George Soros.

That website clearly says of paid liberal protesting: "It's a thing. And it pays BIG BUCKS!" It even quotes me saying: "A great career choice." And I would never lie to me.

More important than the online evidence is my personal testimony as a man who has built a successful paid protesting career. (Please don't tell my employer, the Chicago Tribune, about this activity as it is forbidden by our ethics policy and would undoubtedly lead to my immediate dismissal. Your discretion is appreciated.)

I won't bore you with the full text of my Paid Liberal Protester Employment Contract, but here are some key excerpts:

• "The initial job title of the Employee will be the following: Paid Liberal Protester. The initial job duties the Employee will be expected to perform will be the following: Be angry. Be militant. Engage in criminal acts to get what Employer wants. Cause Republican lawmakers to rush into 'safe spaces' and fear people they used to dismissively refer to as 'sensitive snowflakes.' "

• "Compensation paid to the Employee for the services rendered by the Employee as required by this Agreement will include a wage at a rate of $1,500 per week."

• "The Employee's primary place of work will be at the following location: Any space where Republican lawmakers are attempting to hold a meeting with 'Constituents.' Employee shall be a 'Constituent' of said lawmaker, but won't count because 'Employee' is a Paid Liberal Protester, as detailed in 'Job Title and Description' and as announced by frightened lawmaker."

• "The Employee will be entitled to the following benefits: Retirement Savings Plan in which all Employer wealth is evenly redistributed to 'the workers,' aka 'Employees'; free marijuana; two round-trip flights per-year aboard private jets owned by Employer (George Soros); annual subscription to 'Rhyming Liberal Protest Chants Digest'; comprehensive health insurance plan (no dental); and free tuition to qualifying Liberal Indoctrination Centers (aka 'universities')."

• "Employer shall not discriminate against any Employee as long as said Employee is one of the following: an anarchist, a Marxist, a communist or a member in good standing of the left-wing Socialist brigade."

While most people become paid liberal protesters either for the money or the free marijuana, I've found the best benefit is the power that comes with the job.

Florida Sen. Marco Rubio, R-Cowardville, said Sunday that he won't take part in any town hall meetings because "liberal activists" will "heckle and scream at me."

Texas Rep. Louie Gohmert, R-Scaredytown, said in a statement that he won't do town hall meetings for now: "Unfortunately, at this time there are groups from the more violent strains of the leftist ideology, some even being paid, who are preying on public town halls to wreak havoc and threaten public safety."

(Worth noting, I recently had "Havoc Wreaker" tattooed on my forehead.)

Even Illinois Rep. Randy Hultgren, R-Dontyellatme, has said he prefers to meet with constituents in small groups because some liberal protesters are "following a well-publicized 'playbook' on how best to disrupt and prevent a civil dialogue." That's correct. The playbook is distributed with the employee manual and the black ski mask employees are required to wear while vandalizing.

See what I mean about power? All that and a cushy retirement plan.

Now that's what I call a career.

It's also what I call democracy.