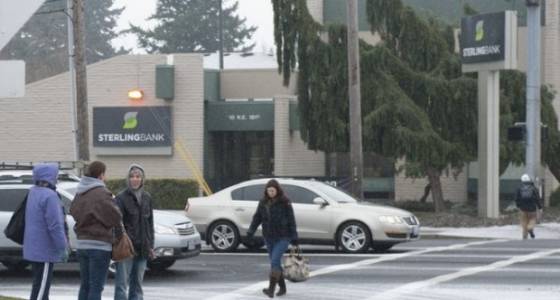 Thursday starts of foggy in some areas and with temperature again hovering near freezing including Orchards, Hillsboro, Cornelius and some Clackamas County locations. Watch for freezing fog and slick spots on your commute.

U.S. 101 SOUTH OF CANNON BEACH 7 a.m.; One lane of U.S. 101 five miles south of Cannon Beach had been open overnight for travelers. The lane closes at 7 a.m. and will remain close at least through the morning so rock scalers can continue to work at the landslide location. The goal is to get the slide cleaned up and the road open some time late this morning or early this afternoon.

Update 9 a.m.; One lane of U.S. 101 is now open five miles south of Cannon Beach while crews clean up the landslide that closed the road yesterday. Flaggers will be controlling two way traffic through the area.

Later today showers will return and some of those could be mixed with snow or hail. On at about 3:30 p.m. Wednesday an isolated hail shower caused several crashes on Highway 22 near 52nd Avenue in Northwest Salem. The crashes blocked the westbound lanes and the road was shut down for more than an hour and caused a backup more than 3 miles long.

When the weather turns snowy or icy, slow down and leave plenty of stopping room. The forecast calls for isolated showers of rain, snow or hail through Friday. Take it easy out there.

Heads up for the weekend: The Morrison Bridge will close to motor vehicles on 7 a.m. Sunday, February 26 until as late as 7 p.m. for inspection and maintenance work. The bridge will be raised in the morning, but should be open to pedestrians and bicyclists by afternoon. Avoid delays and choose another bridge. The work is weather dependent, and could be cancelled for bad weather conditions. Details: www.multco.us/bridges