“The White Helmets,” directed by Orlando von Einsiedel, bagged an Oscar on Sunday for the best short documentary. Based on a volunteer rescue group operating out of war-torn Syria, the 40-minute Netflix film sent out a strong social message calling for... 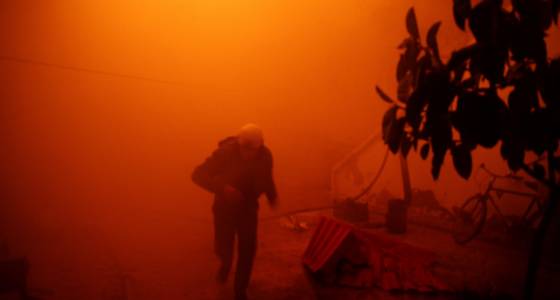 “The White Helmets,” directed by Orlando von Einsiedel, bagged an Oscar on Sunday for the best short documentary. Based on a volunteer rescue group operating out of war-torn Syria, the 40-minute Netflix film sent out a strong social message calling for an end to the conflict in the country.

But who are the White Helmets?

The first self-organized groups of volunteers in Syria emerged in the end of 2012 when President Bashar Assad’s regime ramped up the aerial bombardment of rebel-held areas, but they first got together as one organization in October 2014.

With almost 3,000 volunteers on ground, the Syria Civil Defence group attempts to save the maximum number of lives at the scenes of attack and facilitate the strengthening of communities in the region. The White Helmets maintain that they are a “neutral and impartial organization,” only looking to serve the people of Syria.

A member of the Syria civil defence, also known as the White Helmets, runs at a site hit by an airstrike in the rebel held besieged Douma neighborhood of Damascus. Photo: REUTERS/Bassam Khabieh

At the Oscars ceremony Sunday, director von Einsiedel read out a statement from the group’s founder Raed Saleh. “We are so grateful that this film has highlighted our work to the world. Our organisation is guided by a verse from the Quran: to save one life is to save all of humanity,” the statement said. “We have saved more than 82,000 Syrian lives. I invite anyone here who hears me to work on the side of life to stop the bloodshed in Syria and around the world.”

Following the announcement of the results, the White Helmets, who were also nominated for the 2016 Nobel Peace Prize, released a statement. In the statement, Saleh said: “We are honored that ‘The White Helmets’ film has received an Oscar.  This film has helped show the world what is happening in Syria and we want to thank our brothers and sisters who stand with us on the side of life.”

Saleh, along with White Helmets member and the film’s cinematographer Khaled Khatib, was supposed to attend the ceremony but chose not to as “intense air strikes across the country mean he must focus on work inside Syria.”

Khatib, however, despite having a visa, was barred from entering the U.S., a move that was "sad and confusing," according to the film’s producer Joanna Natasegara, who was present to collect the award.

“I am absolutely delighted that we won an Oscar — it shows us that people care about us and the people we serve,” Khatib said in the statement. “This award is for all the volunteers of the White Helmets and all people around the world who are working for peace.”

“The White Helmets” received a standing ovation at the Oscars after the director called for an end to the violence in the Syria.