Stars, golden statuettes and Hollywood’s biggest power players were set to assemble for the 89th annual Academy Awards Sunday night at Dolby Theatre in Los Angeles. Luckily, there’s a very simple way to keep track of all the winners and losers during... 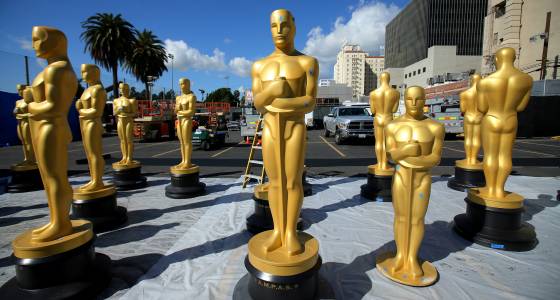 Stars, golden statuettes and Hollywood’s biggest power players were set to assemble for the 89th annual Academy Awards Sunday night at Dolby Theatre in Los Angeles. Luckily, there’s a very simple way to keep track of all the winners and losers during the film industry’s biggest night of the year.

We’ve put together a simple and easy ballot to follow for every viewer and moviegoer to play prediction games at home with our official Oscars ballot. You can download it below and print it to make predictions and tally the evening’s top winners.

As of Friday, most of the best bets seemed to be on “La La Land.”

Director Damien Chazelle’s musical starring Ryan Gosling and Emma Stone — who received nods for Actor in a Leading Role and Actress in a Leading Role, respectively — led the top contenders with 14 nominations, even with the all-time record for a single film in a year next to only 1997’s “Titanic” and 1950’s “All About Eve." Both of those went on to claim the coveted Best Picture award.

But the sprawling, entertainment industry-driven “La La Land” had some stiff competition across a number of genres. Sci-fi mind bender “Arrival” and the independent coming-of-age heavyweight “Moonlight” had eight nominations apiece.

The other Best Picture contenders included Mel Gibson’s “Hacksaw Ridge,” “Manchester By the Sea” and “Lion,” with each sporting six total nominations and also aiming to steal awards from “La La Land.” Gosling will go up against “Hacksaw” star Andrew Garfield and “Manchester” darling Casey Affleck, the latter of whom was considered the favorite in a deep Best Actor field. Of course, each must also square off against two-time Oscar winner and “Fences” lead and director Denzel Washington, whose adaptation of famed playwright August Wilson’s stage production was up for four awards.

Stone, too, clashed with Oscar royalty Meryl Streep in the Best Actress category. The all-time leader with 20 career nominations, Streep could pick up her fourth award for “Florence Foster Jenkins,” but “Loving” actress Ruth Negga, previous winner Natalie Portman’s “Jackie” portrayal and Isabella Huppert’s turn in “Elle” were all in the mix.

Here’s a downloadable ballot for the awards, complete with every category and nominee, to help you keep track at home throughout the night.