PricewaterhouseCoopers (PwC), the accountancy company that has been counting Oscar ballots since 1935, admitted in a statement that presenters Warren Beatty and Faye Dunaway had been given the wrong envelope during the award for best film. "La La Land"... 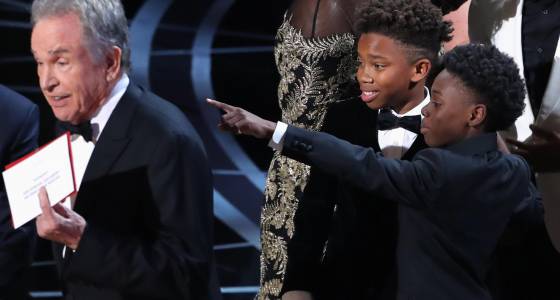 PricewaterhouseCoopers (PwC), the accountancy company that has been counting Oscar ballots since 1935, admitted in a statement that presenters Warren Beatty and Faye Dunaway had been given the wrong envelope during the award for best film. "La La Land" producer Fred Berger was already mid-way through his acceptance speech when producer Jordan Horowitz interrupted him to say that there was a mistake and Barry Jenkin's film "Moonlight" was the actual winner.

Beatty and Dunaway apparently took the envelope for the best actress winner Emma Stone to the stage for the final prize. When the initial wrong announcement was made by the presenters, the entire crew of "La La Land" came up to the stage. Thank you speeches had begun when representatives for PwC realized the mistake and rushed onstage to try and stop the speeches.

The chaotic situation was handled with comic ease by first-time Oscar host Jimmy Kimmel, who came forward to inform the cast that "Moonlight" had indeed won, showed the inside of the envelope as proof, and said: "I knew I would screw this up."

As presenters, winners and members from Academy of Motion Pictures Arts and Sciences huddled to discuss the fiasco, there were shouts of excitement. Beatty refused to give up the envelopes until he could hand them first to Moonlight director Barry Jenkins. “La La Land” director Damien Chazelle and Jenkins hugged amid the chaos.

“Even in my dreams this cannot be true,” Jenkins told the crowd. "To hell with dreams! I’m done with it because this is true," he said.

"Moonlight," which released last year October, is about a young boy struggling with poverty and his sexuality in Miami. The movie had made over $22 million as of Sunday at the box office, the Washington Post reported. Meanwhile, "La La Land" which was released December 2016, has earned about $300 million worldwide, according to a report in Deadline.