“Moonlight” won the Academy Award for best picture of 2016, not “La La Land.”It’ll be a while before we can drop the second part of that sentence. What happened Sunday night at the Dolby Theatre in Hollywood contained the strangest plot twist among... 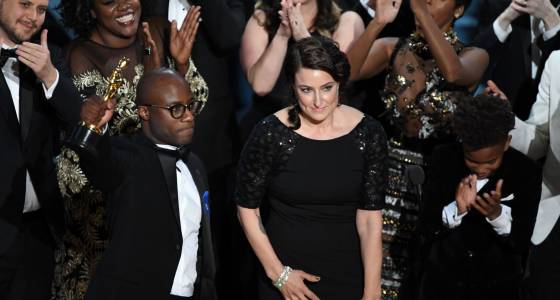 “Moonlight” won the Academy Award for best picture of 2016, not “La La Land.”

It’ll be a while before we can drop the second part of that sentence.

What happened Sunday night at the Dolby Theatre in Hollywood contained the strangest plot twist among the rich, famous and addled since the recent election. For years, we all heard the same blase litany of complaint about the Oscars. So canned. So predictable.

So what happened there at the end of the ceremony, broadcast in 225 countries “that now hate us,” as emcee Jimmy Kimmel pointed out?

On Sunday, the winner of the “worst supporting envelope” award went to the envelope that somehow ended up in the hand of the final presenter, Warren Beatty.

With his long-ago “Bonnie and Clyde” costar Faye Dunaway at his side, Beatty had the misfortune of opening the (wrong) envelope, the contents of which were then read aloud to a billion or so viewers worldwide. Dunaway saw only one movie title on that (wrong) card, and the title was “La La Land.”

According to the Los Angeles Times, a stagehand in the wings was heard to say: "Oh my god, he got the wrong envelope." The reporter backstage noted that for a few awful seconds, the guy paced back and forth, repeating the phrase, seeing if he could wring any new, less dire meaning out of it.

After watching Beatty stumble through what seemed like a comic attempt to draw out the suspense, Dunaway teased with a quick, “You’re awful!” And then she read out the (wrong) title. One long minute and 29 seconds later, after two acceptance speeches and a rising tide of nervous murmur on an increasingly crowded stage, “La La Land” producer Jordan Horowitz knew what had to be said, publicly, immediately.

Michael Shannon, supporting actor nominee for “Nocturnal Animals,” told me early Monday morning: “Yeah, kinda tense there. At first it seemed like Warren was being kinda playful or whatever. And the ‘La La Land’ group handled it well. But it was a very strange situation. I'd just worked with Trevante Rhodes from ‘Moonlight’ (on the upcoming movie “Horse Soldiers”) and I could tell he was pretty upset when he got on stage.”

Then again, Shannon says, “at the end of the day ‘Moonlight’ is a very special movie.”

Horowitz may have been a little brusque with Beatty, but he moved quickly and told the truth. The “La La Land” producers and creative artists looked understandably dazed by what must’ve felt like an impromptu remake of “Whiplash,” Chazelle’s previous feature.

Yet many in the theater Sunday plainly were gratified that “Moonlight” had won after all. A really good, often exhilarating movie, which deservedly handed director Chazelle the directing prize and Emma Stone the leading actress award, ultimately lost out to a genuinely great story of a young, gay, thwarted but ultimately liberated African-American boy, growing up in 1980s Miami. “Moonlight,” in writer-director Barry Jenkins’ hands, is told in a way that leaves noble intentions and faux documentary realism by the wayside. It’s as supple cinematically as it is carefully calibrated emotionally.

It’s also a financial success. “Moonlight” cost somewhere between $1.3 million and $1.5 million to produce, and it has made 15 times that in its theatrical release. That’s a fine turn on a very wise investment.

On stage, thinking he’d just won the best picture Oscar, “La La Land” producer Horowitz spoke of the industry’s collective responsibility to present “bold and diverse work--work that inspires us toward joy, towards hope, and towards empathy.” A reverse-Cinderella minute later, “La La Land” handed over its statuettes to the “Moonlight” crew. But Horowitz’s words still held.

On Twitter, critic Calum Marsh said it best, referencing the “Bonnie and Clyde” costars along with the climax of Chazelle’s musical: “In true form, La La Land only won Best Picture in a fantasy moment shared between former lovers imagining wistfully what might have been.”

Trump and his discontents came in for a healthy quotient of zingers from emcee Kimmel. He wasn’t alone, though the political tenor of the evening was more reflective than combative. Mark Rylance, last year’s supporting actor Oscar winner for “Bridge of Spies,” presented the supporting actress nominees but first made time for a thought or two on the subject of opposition.

“Opposition’s great in films, in stories, it’s wonderful in sports,” the actor mused. “Who wants a weak opponent in a sports match?” Then he added: “It’s really good in society.” Women, he said, seem to be better than men at the art and skill of “opposing without hatred.”

"Zootopia" won the animated feature Oscar, which provoked co-director Rich Moore to remind us that the movie was about racial profiling, allegorically speaking, and that "tolerance" will always crush "fear."

But the strongest, clearest voice of political opposition came from an Oscar winner who declined to appear in person. From Iran, writer-director Asgar Farhadi received the foreign-language film prize, his second, for "The Salesman." Earlier this week he and his fellow foreign-language nominees signed a joint letter of protest, following the Trump administration's travel ban targeting seven majority-Muslim nations.

“I'm sorry I'm not with you tonight. My absence is out of respect for the people of my country and those of other six nations who have been disrespected by the inhumane law that bans entry of immigrants to the U.S.” Firouz Naderi, a former NASA director, joined Ansari on stage.

Dividing the world into `us' and `enemies' categories creates fear,” Ansari continued, reading from the director's statement. The movies create empathy “between us and others. It is an empathy that we need today.”