Sen. Ron Wyden, D-OR, had harsh words for Donald Trump in response to the president's first address to a joint session of Congress Tuesday evening. "The president then hid behind hyperbole and rhetoric to distract from the fact that his tax plan will raise... 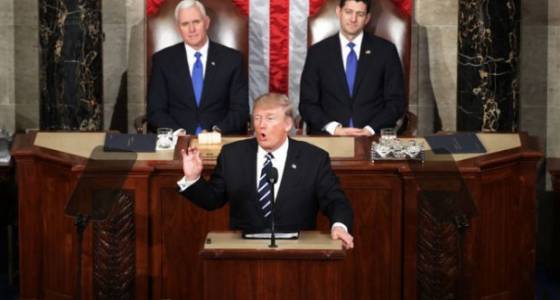 Sen. Ron Wyden, D-OR, had harsh words for Donald Trump in response to the president's first address to a joint session of Congress Tuesday evening.

"The president then hid behind hyperbole and rhetoric to distract from the fact that his tax plan will raise taxes on working families and cut benefits that the middle class depends on all so the wealthy can pay a lower rate," Wyden wrote in a jab at Trump's assertions that he would preside over major tax cuts for American households and a revision of the Affordable Care Act that would cover more people and lower costs.

Sen. Jeff Merkley criticized Trump's pledge to provide the country with clean air and water, as did several environmentalists and activists Tuesday night. The president's proposed budget is expected to call for cuts of up to 25 percent to the Environmental Protection Agency.

Would be comical to hear Trump talk about clean air and water while pushing to expand pollution - if kids' health weren't at stake.

The Oregon Democrat also called the president's pledge to repeal and replace Obamacare a "betrayal to working Americans."

Suzanne Bonamici, who represents Oregon's 1st Congressional District, did not release a statement or react to Trump's address on social media. She did, however, host a Facebook Live conversation with her guest for the speech: Portland Community College President Mark Mitsui.

The two lamented the absence of higher education among the president's talking points.

In addition to her Facebook Live broadcast after the speech, Bonamici, along with several other female representatives, made a statement with her outfit ahead of Trump's address. The Oregon Democrat wore white as a nod to the women's suffragette movement, which House Minority Leader Nancy Pelosi called a "statement of values."

I am wearing suffragist white to #JointSession as a pledge to protect women's health, fair pay, paid leave & more! #womenwearwhite

Oregon's sole Republican representative on Capitol Hill, Greg Walden of the 2nd Congressional District, has not yet released a statement.

Reps. Peter DeFazio and Kurt Schrader of Oregon's 4th and 5th congressional districts also did not release statements or tweets Tuesday evening. Schrader did, however, take a couple of jabs at Trump during the address.

25 mins into the speech & still no mention of working with Congress. Zero acknowledgment at all of the law making bodies he's addressing.

Finally! An hour in, he mentions our budget. But of course he only talks about the defense budget. No mention of anything else.

Wyden's critique was the most extensive of Oregon's elected leaders on Capitol Hill. He blasted Trump's Cabinet appointments, calling them "Wall Street insiders who have made a fortune on the backs of the vulnerable."

The senator also called the president's proclamations on Obamacare as "health care happy-talk," claiming "Republicans are dangerously close to taking America back to the days when health care was only for the healthy and the wealthy."

Wyden also took issue with Trump's executive orders, from the travel and immigration ban on seven majority Muslim countries to the president's rolling back of Obama-era protections for undocumented immigrants.

"If Trump is ready to take up comprehensive immigration reform, there is a bipartisan immigration proposal that's a good place to start. He needs to walk back the damaging statements and halt indiscriminate deportations of families. Mass deportations of people who have committed no crimes do not make us safer," Wyden wrote.

Merkley later released his own statement, which focused exclusively on health care.

"There's no clearer example of Trump's empty promises than his continuing calls to repeal the Affordable Care Act, and rip health care coverage away from 20 million low-income and working Americans without providing any real replacement plan," he wrote. "The truth is, rather than the 'disaster' that Trump claims it is, the Affordable Care Act is literally saving lives. That's a fact. I know it, because I was honored to bring as my guest tonight a woman who owes her life, and the life of her son, to the Affordable Care Act."