Obama and daughter Malia attend 'The Price' on Broadway

Former President Barack Obama surprised Broadway theater-goers Friday when he and daughter Malia attended the evening performance of "The Cost." The daddy-daughter duo headed backstage just after the play -- a new revival of the Arthur Miller classic --... 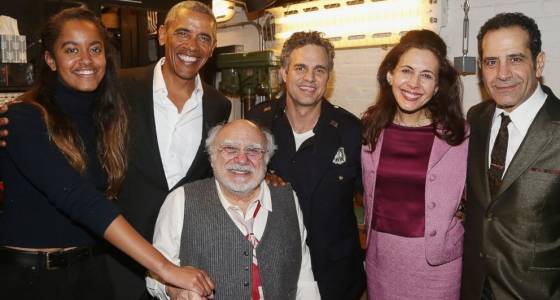 Former President Barack Obama surprised Broadway theater-goers Friday when he and daughter Malia attended the evening performance of "The Cost."

The daddy-daughter duo headed backstage just after the play -- a new revival of the Arthur Miller classic -- and met with the cast, like Mark Ruffalo, Danny DeVito, Tony Shalhoub and Jessica Hecht.

The Roundabout Theatre Corporation tweeted a photo of the pair with the cast, writing, "We are so honored to have had President @barackobama in our theater this evening for #ThePriceBway!"

The president and Malia were spotted leaving the American Airlines Theatre through a stage door, and have been greeted by catcalls and shouts of "there he is!" by passers-by.

In "The Cost," a police officer feels that life has passed him by whilst he took care of his late father. He and his estranged brother ought to reunite to sell off their father's possessions.

The Obama clan is no stranger no Broadway, getting attended various shows during his presidency, like "Hamilton," "A Raisin in the Sun," "Joe Turner's Come and Gone," "Memphis," "Kinky Boots," "Spider-Man: Turn Off the Dark," "Sister Act," "The Trip to Bountiful," "Motown the Musical" and "The Addams Loved ones."