Northwestern lets one slip away in 63-62 loss to Indiana

Assembly Hall turned into Assembly Hell — again — for Northwestern.The Wildcats, chasing a program-record 21st victory and their first invitation to the NCAA tournament, looked poised to take care of the first and further their case for the second Saturday... 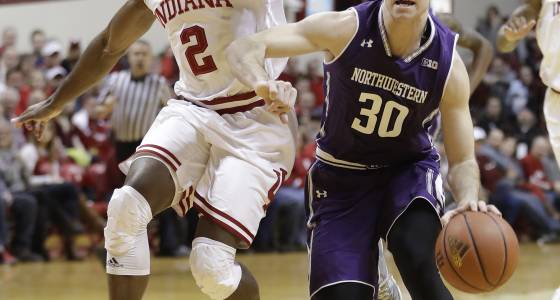 The Wildcats, chasing a program-record 21st victory and their first invitation to the NCAA tournament, looked poised to take care of the first and further their case for the second Saturday night.

But both remain on hold after the Wildcats fell cruelly to the Hoosiers 63-62 in a game that ultimately was decided when a Thomas Bryant free throw clanged high off the back of the rim before falling through with 2.6 seconds left, sending a silent Assembly Hall into a frenzy. Bryant had just tied the game with a dunk and Scottie Lindsey fouled him on the basket.

The defeat is Northwestern's fifth in seven games. While it won't cripple its chances for a tournament invite, losing a seven-point lead with 1 minute, 33 seconds to go won't help.

"We're down right now," Northwestern coach Chris Collins said. "We put our hearts on the floor. You come up short like that, it hurts.

"I want them to hurt. But make no mistake … till somebody tells me we don't have any more games, we're gonna fight."

Northwestern did plenty of that early. Vic Law threw an alley-oop to Gavin Skelly in the midst of the Wildcats (20-9, 9-7 Big Ten) taking a 12-point, first-half lead fueled on an 11-0 run. Lindsey, still shaking off the effects of mononucleosis in his third game back, sandwiched dunks around an Isiah Brown layup, the second after his steal during that stretch.

Law's two-handed slam with 5:28 left gave the Wildcats their biggest lead and looked like it might put last season's 89-57 embarrassment in Bloomington to rest.

Devonte Green finished the crushing sequence with a prayer from half-court that was answered when the ball bounced off the backboard and the front and back of the rim to send the Wildcats bewildered to their locker room.

Indiana's lead would have been one fewer if Green had not been credited retroactively during a Northwestern timeout with a 3-pointer rather than a 2 he had made with 5:01 left.

The Wildcats climbed back into contention with another 11-0 run early in the second half and led by as many as seven. But in the final second Bryant McIntosh's prayer from just inside half-court teased the rim before bouncing off.

"I thought I hit it," McIntosh said. "It's a tough one to swallow."

McIntosh, who scored 17 of his game-high 22 points during the second half, said the Wildcats had a team meeting after Tuesday's 66-50 setback against Illinois in Champaign.

Dererk Pardon had 12 points and 10 rebounds Saturday for Northwestern, which will play Michigan on Wednesday and Purdue next Sunday to finish the regular season. Lindsey had 13 points for the Wildcats, while James Blackmon Jr. led the Hoosiers with 13.

"It's really just guys deciding how we want to finish this year," McIntosh said Friday. "Nothing is guaranteed at this point. We can do something special or we can let this slip away."

The Wildcats let this one slip away, culminated when Lindsey fouled Bryant on that dunk with 2.6 seconds left.

That put Bryant — and the Wildcats' NCAA tournament hopes — on the line.

Northwestern guard Bryant McIntosh on loss to Indiana: 'It's heartbreaking'