By the editors of Yomiuri Shimbun It has become more likely that the murder of Kim Jong Nam was a state-sponsored act by North Korea. The incident has served to antagonize even Southeast Asian countries with which it had friendly relations and will thus deepen... 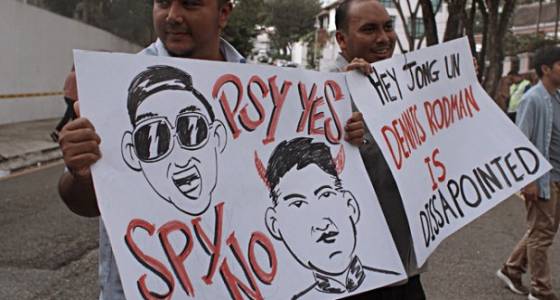 By the editors of Yomiuri Shimbun

It has become more likely that the murder of Kim Jong Nam was a state-sponsored act by North Korea. The incident has served to antagonize even Southeast Asian countries with which it had friendly relations and will thus deepen its isolation from the international community.

Malaysian police authorities have requested that North Korea turn three North Koreans in for questioning, including a second secretary at the North Korean Embassy in Kuala Lumpur and an employee of Air Koryo, who they believe were involved in the killing of Kim Jong Nam.

In addition to two women - one Vietnamese and the other Indonesian - who were said to be the direct perpetrators of the attack on Kim Jong Nam, Malaysian police have arrested a man with North Korean citizenship. Believing that four other suspects in the case have returned to North Korea, the Malaysian police have called on Pyongyang to hand them over.

Initial investigations have proved successful in grasping the outline of a group of people involved in the killing. Video taken by security cameras at the airport contributed greatly to identifying the perpetrators.

It was also found that the perpetrators and others involved had practiced the use of poisonous substances at a shopping mall in Kuala Lumpur. This indicates that the murder of Kim Jong Nam was a premeditated act, prepared deliberately.

The toxic substance used in the attack has not been determined. The relevant Malaysian authorities are called on to make all-out efforts to uncover the whole truth of the incident.

What cannot be overlooked is that North Korea tried to blatantly obstruct investigations by doing such things as demanding early handover of the body to its embassy. This resulted in sharpening the row with Malaysia.

The Korean Central News Agency declared that the accusation of North Korea's responsibility in the murder of Kim Jong Nam is an "intrigue" scripted by South Korea. But the KCNA did not present any objective evidence to prove its assertion.

Whenever coming under suspicion, North Korea tries to evade responsibility by blaming other countries. It is a usual tactic of North Korea.

Such a generous stance backfired with the result that Malaysia has been used as a stronghold of operations by North Korea spy agents. Its policy regarding North Korea must be reviewed urgently.

Vietnam and Indonesia, whose citizens were arrested, are traditionally friendly countries for North Korea. Distrust of North Korea will unavoidably prevail among other members of the Association of Southeast Asian Nations.

Some point out that Southeast Asia, where control of cross-border movements of goods and people is lax, has provided loopholes for sanctions adopted by the U.N. Security Council against North Korea over its nuclear and missile development.

Responding to the incident in Malaysia, ASEAN member countries must actively cooperate in an effort to reinforce a coalition against North Korea.