While the ongoing feud between Nicki Minaj and Remy Ma heats up, the "Anaconda" singer does not seem to care about the social media diss. Meek Mill's ex-girlfriend was spotted Tuesday showing off her curves in a red   cutout swimsuit while... 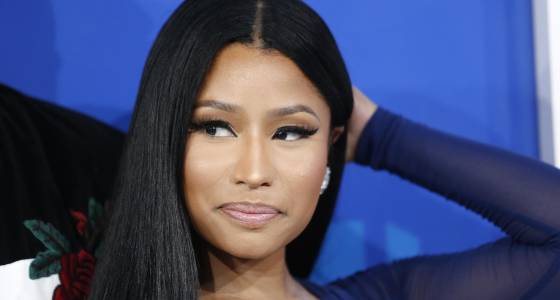 While the ongoing feud between Nicki Minaj and Remy Ma heats up, the "Anaconda" singer does not seem to care about the social media diss. Meek Mill's ex-girlfriend was spotted Tuesday showing off her curves in a red   cutout swimsuit while shooting a music video for rapper Future in Miami.

Minaj, who has not directly responded to Remy Ma's diss track, twerked in front of the camera when Future joined her for the video.

The drama between Minaj and Remy Ma began after the latter released a diss track, titled "Shether," over the weekend slamming the 31-year-old. The diss track reportedly was in response to Minaj's latest track with Gucci Mane, “Make Love,” which some speculate dissed Remy Ma.

In a now-deleted post, Minaj poked fun at Remy Ma’s sales figures for her recent album for Fat Joe, “Plata O Plomo,” which sold 11,000 copies. Following this, Remy Ma trolled Minaj on Tuesday with a photo of the iTunes charts, showing “Shether” at No. 2.

Minaj's ex-boyfriend, who was also called out in Remy Ma's diss track, remained silent over the feud. However, The Game slammed Mill for causing the beef between the two female rappers.

In his lengthy rant, The Game claimed that Mill is still salty because Minaj left him, and slammed the Philadelphia rapper for being ungrateful to his ex-girlfriend who gave him “life,” affection and even bought him the things he “couldn’t ever afford” on his own. The Game also noted that Minaj was by Mill's side during his infamous beef with Drake, which began in July 2015.

Meanwhile, another of Minaj's ex, Safaree Samuels, spoke out about the diss track: “Credibility wise, it’s just a very disrespectful record. It’s probably the most disrespectful record I’ve ever heard in my life.” When TMZ reporters asked Samuels if Minaj should respond to Remy Ma, he said: “I don’t, cause it’s like what can you even say? What can you even say to Remy? There’s really not much.”

“I don’t get caught up in the whole female beef thing, so you know what I’m saying. I’ma just try to mind my business as much as possible,” Samuels said, when asked if he would assist Minaj in the feud.