New York pols just love to virtue-signal, even ludicrously — as city Comptroller Scott Stringer demonstrated this week with his call for Texas to nix legislation banning transgender bathrooms.Stringer, along with state Comptroller Tom DiNapoli and assorted... 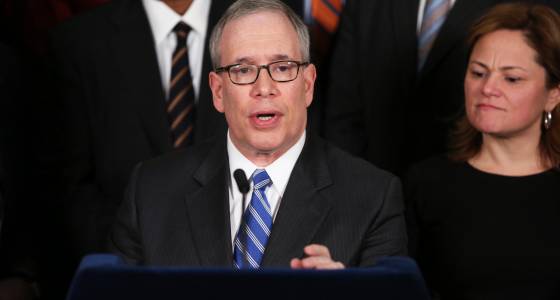 Stringer, along with state Comptroller Tom DiNapoli and assorted other investors, warned Texas officials that their bathroom bill would hurt Lone Star companies.

Why’s that Stringer and DiNapoli’s business? Because, they say, the pensions they oversee are invested in such firms.

“Equality, diversity and inclusiveness are fundamental elements of a successful workplace,” they wrote. Bills that “limit the human rights of LGBT people” may have “troubling . . . implications for the business and investment climate in the state.”

Get a load of that: Stringer and DiNapoli, whose state repeatedly ranks among America’s worst for its business climate, deign to advise Texas, which ranks at the top.

In any case, if Stringer & Co. really thought there was any objective case that the law would tank the Texas economy, they’d have a duty to pull investments out of the state.
Stringer’s real aim is to pander to the LGBT crowd in New York and impress liberals here who may think the Texas bathroom bill is discriminatory.

Just as silly was Mayor de Blasio’s recent hint about divesting from banks that lend to the Dakota Pipeline project — which is nearly done, and needs no more big loans.
Same for DiNapoli’s new push for Exxon to estimate the risks from possible new anti-climate-change laws.

It would be nice if these guys spent all that time and energy working to improve the lives of New Yorkers instead of burnishing their lefty bona fides.