National Nutrition Month: 7 Ideas For Eating Healthy In 2017 Include Tips On Carbs, Protein And Sugars

Many Americans abandoned their New Year’s weight loss resolutions in January and chowed down on doughnuts for Fat Tuesday in February. With the arrival of March, however, comes National Nutrition Month, a time to focus on not necessarily slimming down,... 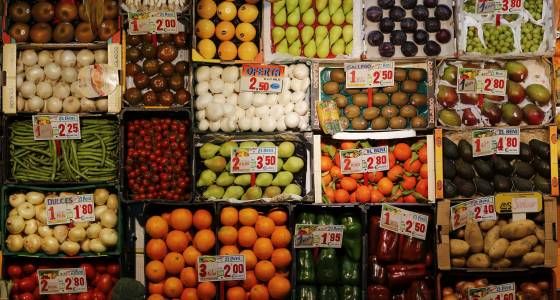 Many Americans abandoned their New Year’s weight loss resolutions in January and chowed down on doughnuts for Fat Tuesday in February. With the arrival of March, however, comes National Nutrition Month, a time to focus on not necessarily slimming down, but protecting your heart and gut in the long term by adopting some healthful habits.

A May study in the Journal of Pediatric Obesity found that teens who consumed two breakfasts in the morning were less likely to be obese than those who skipped the meal altogether. As for adults, the notion that eating breakfast boosts your metabolism has long been disputed, but a solid morning meal can certainly stave off sudden drops in blood sugar and boost work performance, while shifting most of your calories to the front end of your day can increase weight loss, according to the Mayo Clinic. Still, it’s safe to say that the benefits won’t come from a stack of syrup-soaked pancakes.

Yoni Freedhoff, an assistant professor of family medicine at the University of Ottawa, noted in a piece for U.S. News & World Report that avoiding sugary sodas should be a no-brainer, but even supposedly healthy drinks like milk and orange juice may come with serious drawbacks.

“Simply put, our bodies don't register them the same way as solids,” Freedhoff wrote. “Eat 120 extra calories along with your breakfast and you're likely to compensate for those calories by eating a smaller amount of your usual choices. But if those 120 calories come from liquids, studies show your caloric compensation will be minimal at best.”

One drink with zero calories that can keep you full and hydrated is, of course, water.

Carbohydrates were the boogieman of early-aughts diet fads, and with multitudes “going paleo” and avoiding gluten more recently, they’re at risk of being demonized once more. But multigrain breads, bagels, pastas and other products, like oatmeal and whole wheat cereals, can vastly reduce your risk of stroke, diabetes and heart disease, according to the American Heart Association.

Cut Down On Sugar…

Added sugars are hidden everywhere, from dried fruit and energy drinks to ketchup and pasta sauces. Be sure to try swapping out things like raisins and canned peaches for fresh apples and berries, using naturally occurring substitutes in your coffee and baked goods and checking out nutrition label. (Under “Carbohydrates,” shoot for a high amount of dietary fiber and a sugar level in the single digits, or at least no higher than the teens.)

But Not Necessarily Fat

Thanks to the Big Sugar lobby, fats have long been a central enemy of dieters. But when consumed in moderation, omega-3 and omega-6 fatty acids, often found in fish, nuts and avocados, can wield significant health benefits, to your heart and brain. On the other hand, the Food and Drug Administration moved artificial trans fats to its list of substances considered unsafe for consumption a year and a half ago—yet one more reason to avoid them, along with saturated fats, which both raise the level of bad cholesterol in the blood.

Regardless of their prices and ambiance, non-chain restaurants provide food with caloric equivalents to the offerings of your local McDonalds or Burger King, an April study in the Journal of the Academy of Nutrition and Dietetics found. Research from the University of Illinois at Urbana-Champaign pointed to a 200-calorie increase among people eating out, compared to those eating at home, so it may help to opt for a night in.

"More than half of Americans are overweight and it's no coincidence that we are eating out in record numbers," Jayne Hurley of the Center for Science in the Public Interest told Good Morning America in May. "More restaurants are serving huge portions of high-calorie food. An entree or appetizer or dessert that is less than 1,000 calories is tough to find. That's half of what you need for the whole day."

Take In Plenty Of Protein, But Take It Easy

Americans have seized on a protein craze in recent years, with a focus on energy bars and Greek yogurts often packing 15 grams a pop. But most people, unless they’re body builders or training for an Iron Man race, don’t really need that level of fuel, and can put themselves at an increased risk of kidney disease, cancer and osteoporosis as a result.