The good news for NASCAR is that all signs indicate Dale Earnhardt Jr. has a legitimate shot to win the Daytona 500.A victory for NASCAR's most popular driver, in his return to racing after a concussion sidelined him the second half of last season, would... 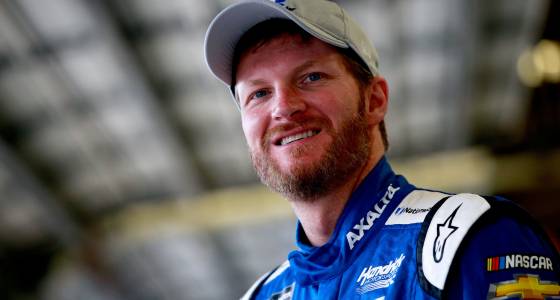 The good news for NASCAR is that all signs indicate Dale Earnhardt Jr. has a legitimate shot to win the Daytona 500.

It means Sunday could be a strong opening day for NASCAR, particularly if Earnhardt can pull off his third victory in "The Great American Race." He's not ready to call himself a favorite, and thinks he'll have his hands full with the Joe Gibbs Racing group and Penske drivers Joey Logano and Brad Keselowski.

NASCAR needs Sunday to go off without a hitch.

NASCAR has countered with a JGR announcement that defending race winner Denny Hamlin and FedEx have signed long-term extensions , while Team Penske locked in Logano and Shell-Pennzoil through 2023.

Both FedEx and Shell-Pennzoil are major sponsors who spend something close to $20 million a year to brand the race cars and market to the NASCAR audience.

NASCAR will launch a new advertising campaign on Sunday called "Ready. Set. Race." and a crash-filled 30-second TV ad was revealed Saturday to promote the 500 .

It's a risky move for NASCAR, but one embraced publicly by drivers. Some fans, particularly longtime watchers, are horrified at the gimmicks NASCAR is using, but a rising crop of young drivers are eager to give it a try.

"I think you have a group of guys coming along that are going to put their signature on this sport," said team owner Chip Ganassi. "The sport's gone through some changes. We're looking at a new format. Some of us older guys, when they talk about changing the format, we look at each other, ask questions. These young drivers, they go, 'OK.' It's kind of no big deal to those guys.

"I think that says a lot about how they approach it, how they look forward to it. So I think it's pretty bright when you have an attitude like that."

Indeed, the faces are rapidly changing in NASCAR as the stars are aging out of their rides.

Jeff Gordon is now a television analyst and will drive the pace car on Sunday . Tony Stewart retired at the end of last season. Carl Edwards decided in late December he didn't want to race this year after coming 10 laps short of winning the championship. Greg Biffle has committed to a television job.

With all those open seats, the series is starting to shift and there's more attention for drivers like Elliott, Gordon's replacement a year ago, and Daniel Suarez, the Mexican driver who turned his Xfinity Series championship into a promotion to the Cup series when Edwards retired.

JGR development driver Erik Jones is a rookie this year and will team with Martin Truex Jr. at Furniture Row Racing as de facto Gibbs drivers.

Austin Dillon made the playoffs last year, and his younger brother, Ty, has a full-time Cup ride this season. Kyle Larson also made the playoffs, and Ryan Blaney had a productive rookie season driving as a Penske development driver.

The starting grid Sunday will look a lot younger, but the car owners who pay for the talent don't seem to mind.

"I love to watch the young guys. I don't know whether it makes me feel young again, I don't know what it is," said Rick Hendrick. "It's just fun to watch those guys mature, grow, come up through the ranks. I've never seen the level of talent that we have today. I think these guys adapt so much faster. I think it's due to video games, simulators, all that.

"The level of the young guys that you see coming along that have the talent that they have, it's super exciting."