Welcome to Clout Street: Morning Spin, our weekday feature to catch you up with what's going on in government and politics from Chicago to Springfield. Subscribe here.  TopspinDemocratic Illinois Attorney General Lisa Madigan skipped a group meeting... 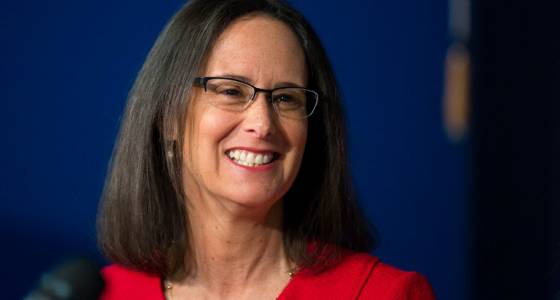 Democratic Illinois Attorney General Lisa Madigan skipped a group meeting with Republican President Donald Trump on Tuesday, a move that she says was intended to be a boycott of the new president’s policies.

Madigan was in Washington, D.C., for a meeting of the National Association of Attorneys General. She declined to attend a meeting at the White House with about two dozen other attorneys general from the group, her office said.

“The president has threatened our civil rights and civil liberties in a way we haven’t seen in decades,” Madigan said in a statement. “He has put Wall Street bankers in the administration to protect the greed that brought our country to financial collapse. I declined his invitation on behalf of the many Americans harmed by his actions.”

President Donald Trump briefly returned to a favorite target during his first address to a joint session of Congress on Tuesday night, assailing gun violence in Chicago while pressing support for law enforcement to ensure public safety.

Trump said it was essential to "break the cycle of poverty"...

President Donald Trump briefly returned to a favorite target during his first address to a joint session of Congress on Tuesday night, assailing gun violence in Chicago while pressing support for law enforcement to ensure public safety.

Trump said it was essential to "break the cycle of poverty"...

The snub of the Republican president by the Madigan, daughter of Democratic House Speaker Michael Madigan, came just days after Republican Gov. Bruce Rauner also avoided an encounter with the new president.

Rauner, who was in the Washington over the weekend for a gathering of governors, skipped a dinner for governors hosted at the White House. That's in contrast to Mayor Rahm Emanuel, a Democrat who met with Trump in December and traveled to Washington earlier this month for meetings with high-ranking White House officials. (Kim Geiger)

*Mayor Rahm Emanuel will announce that Hickory Farms has relocated its corporate headquarters from Ohio to Chicago.

*Gov. Rauner is planning to visit LaSalle County, one area hit hard by Tuesday's storms. A previously scheduled meeting with Chance the Rapper is being rescheduled.

*The Illinois Senate meets and could continue considering parts of a sweeping budget plan.

*The 7th Circuit U.S. Court of Appeals is set to hear oral arguments in a case over fair share union fees. Early in his term, Rauner tried to do away with those fees.

Durbin voted against Ross’ confirmation, and Duckworth voted for him. In January, Duckworth’s office said she raised concerns about the loss of jobs Downstate in a meeting with then-nominee Ross.

“Illegal dumping of foreign steel has forced American companies to lower production and shutter factories, particularly in my state of Illinois, where these practices contributed to 2,000 Granite City steelworkers getting laid off – through no fault of their own – just days after Christmas,” Duckworth said in a statement at the time. “I was pleased Mr. Ross agreed to work with me to crack down on currency manipulation and by his commitment to make timely enforcement of trade laws a priority.”

In many previous confirmation votes, including for higher-profile offices like secretary of state, Democrats Durbin and Duckworth have voted the same way.

The Republican-led Senate confirmed Ross by a 72-27 vote.

*Suburban woman who bought actual moon dust in a government auction - only to have it taken back by NASA - gets her bag of lunar dirt back.

*Ald. Ameya Pawar, a declared Democratic candidate for governor, sends a letter reporting $5,000 in contributions were reported a couple days late because of a "staff communication error."

*Trump passes blame for Yemen raid to his generals: "They lost Ryan."

*Is barring reporters from briefings unconstitutional?

*The strange life, and sudden death, of a North Korean exile.