If any more evidence was needed that the planned one-stop Scarborough subway extension makes no sense, new figures released on Tuesday show the estimated cost has crept up yet again to a staggering $3.35 billion.That’s up from $2 billion in early 2016,... 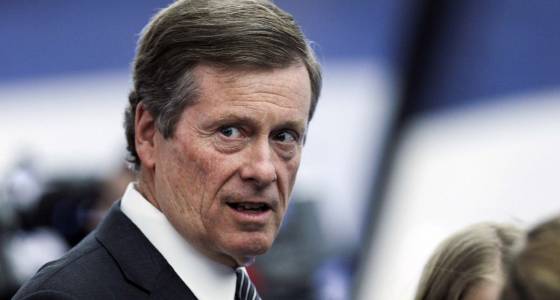 If any more evidence was needed that the planned one-stop Scarborough subway extension makes no sense, new figures released on Tuesday show the estimated cost has crept up yet again to a staggering $3.35 billion.

That’s up from $2 billion in early 2016, a number that was revised repeatedly over the course of the year to $2.9 billion, then $3.16 billion, and then $3.2 billion. Now a report from city staff puts the total bill at $3.35 billion, due mostly to improving a planned new bus station.

You get the picture. It’s a runaway train and there’s no telling where it’s going to stop.

In fact, as the Star’s Jennifer Pagliaro and Ben Spurr report, city staff acknowledge that the range of accuracy for the latest estimate could be off by fully 50 per cent, meaning it could come in as high as $5.02 billion. All that to add a single new stop to the Bloor-Danforth line.

Worse, the cost continues to go up even as the estimated number of new riders the extension will attract is going down. The new study puts it at only 2,300, about half the 4,500 new riders estimated just last summer.

Yet Mayor John Tory continues to argue vehemently in favour of this project, saying that those who are against the extension are “playing politics.”

Indeed, someone is playing politics. But it isn’t the opponents of the Scarborough extension.

Nor does there appear to be any light at the end of this particular tunnel. Asked whether there was any cost that would be too much to spend on the one-stop extension, Tory replied, “I’m just not going to get into that.”

He should. In fact, the mayor owes it to taxpayers and transit riders across the city to explain just what it would take for him to pull the plug on this venture.

The new report shows the subway extension is expected to attract only 2,300 new daily riders compared to the existing Scarborough RT line, which needs to be replaced. That means the city would be paying approximately $1.45 million for every new rider the subway attracts.

And then there’s this: the increase in the estimated cost of the one-stop extension threatens funding for the proposed light rail line along Eglinton Ave. East. That 18-stop LRT is estimated to cost $1.6 billion, money that was supposed to be part of a $3.56-billion funding envelope for both projects.

So much for that.

The subway has been controversial ever since former mayor Rob Ford cancelled plans for a sensible seven-stop light rail line that would have been fully funded by the province in favour of the costly subway extension.

Tory then made it a campaign promise as he bid for suburban votes in 2014. He has since refused to back down on it, despite a growing mass of evidence that it’s a bad idea. Indeed, he insists that it’s “the right thing to do.”

It’s not. The right thing is to serve the residents of Scarborough and the rest of Toronto with the best available rapid transit, while being mindful of overall costs.

Everyone’s interests would be better met by a network of less expensive LRT lines that would reach low-income neighbourhoods as well as the Centennial College and University of Toronto Scarborough campuses.

At the same time, the money now earmarked for the one-stop Scarborough extension would better serve as a down-payment on other transit projects that Toronto truly needs — in particular, on a subway “relief line” designed to ease pressure on the massively over-crowded Yonge line.

When the updated plan comes before city council the mayor and councillors should “do the right thing” and stop this project in its tracks before more time and money are wasted. Enough, already.