Quick survey: Raise your hand if you received a $28,000 pay increase last year.Raise it high. We're waiting. Glancing at our watches. Anyone? No?At least one person in the Chicago area should have his hand up. Donald Orseno, CEO of Metra, received a $28,000... 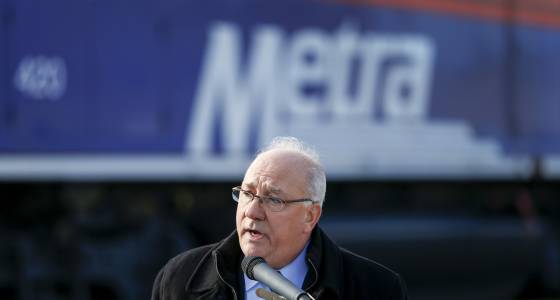 Quick survey: Raise your hand if you received a $28,000 pay increase last year.

We're waiting. Glancing at our watches. Anyone? No?

Did we mention he's retiring at the end of this year? Metra says its board did not engage in pension spiking by awarding the December raise two months before Orseno announced his retirement. No sir. The rules discourage that, officials say.

More on that later.

The 11-member Metra board, which approved the raises, is made up of politically connected appointees, from suburban mayors to a former Chicago alderman chosen by Mayor Rahm Emanuel.

Most of them were appointed after a Metra scandal in 2013 forced two ethics investigations and the resignations or removals of six board members. That board had signed off on a secret $871,000 severance package for then-CEO Alex Clifford. Clifford was ousted after he objected to clout influencing hiring decisions within Metra.

The scandal forced turnover. The new board was supposed to instill fiscal discipline.

Did the experiment fail? Because signing off on lavish raises two years in a row, leading up to an executive's retirement, is the opposite of financial stewardship. The board now set the bar for the next CEO at a salary that outpaces other city rail executives nationwide and wallops most salaries in the public and private sectors.

Remember, Metra is not a private entity. It's funded by its riders — fares have increased three times in three years — and by regional sales taxes and local, state and federal taxes.

Metra board members justified the latest raise for Orseno by comparing his wage to rail executives in a couple of cherry-picked East and West coast cities. They also praised his work ethic.

We would add our own accolades about Orseno.

But gold star performance reviews are not justification for eye-popping salary hikes. While Metra abides by a policy that discourages spikes in pay just before retirement, Orseno's 2015 and 2016 salaries will be part of the formula that determines his final pension. The $26,500 raise in 2015 will count toward it, along with three months of the $28,000 raise that was retroactive. He's also set to receive roughly $57,000 in unused sick and vacation time.

In addition to Orseno's pay hikes, rank-and-file Metra employees have seen their pay climb. A 2014 Daily Herald review found that hundreds of nonunion staffers received pay increases of as much as 36 percent between 2013 and 2014.

The raises shatter every straight-faced defense of fiscal change at Metra. Orseno's salary as deputy director of operations, before he got promoted to CEO, was $178,500. So since August 2013, his pay climbed by $139,000.

The board approved the December raise unanimously, although board member Jack Partelow, appointed in 2009 by Will County Executive Larry Walsh, was listed as absent.

As taxpayers, you might remind those public officials that this board is their board.

They passed budgets that include annual fare hikes foisted on riders. Most of that money goes toward operations (personnel), not new train cars. Taxpayers fund the rest. And board members still think lofty raises are justified.

We didn't realize tone deafness was a prerequisite to be on Metra's board. Now we know.