Meryl Streep Gets Oscars Standing Ovation Before Awards Are Even Announced

Meryl Streep’s Golden Globes speech hasn’t stopped following her yet. Host Jimmy Kimmel brought up her famous take down of President Donald Trump, and it managed to get her a standing ovation during the opening monologue.“We’re also here to honor... 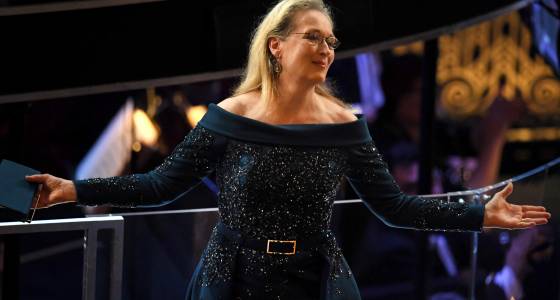 Meryl Streep’s Golden Globes speech hasn’t stopped following her yet. Host Jimmy Kimmel brought up her famous take down of President Donald Trump, and it managed to get her a standing ovation during the opening monologue.

“We’re also here to honor the actors that seem great, but really aren’t,” Kimmel sarcastically said. “Of all the ‘great’ actors here in Hollywood, one in particular has stood the test of time for her many uninspiring and overrated performances.”

Streep, who is nominated for best actress for her role in “Florence Foster Jenkins,” looked rather embarrassed as the cameras focused on her. She quickly embraced Kimmel’s joke, though. When the host asked her to stand up for “a totally undeserved round of applause,” the actress quickly stood up from her front row seat and turned around. Her peers immediately gave her a standing ovation.

The reference was, of course, to the tweet that President Donald Trump sent out after seeing her Golden Globes acceptance speech for the Cecil B. DeMille Award in early January. She criticized Trump as a bully and reminded audiences that freedom of the press is necessary.

“And this instinct to humiliate, when it’s modeled by someone in the public platform, by someone powerful, it filters down into everybody’s life, because it kinda gives permission for other people to do the same thing,” Streep said. “Disrespect invites disrespect, violence incites violence. And when the powerful use their position to bully others we all lose.” Watch her full Golden Globes speech.

Trump responded by calling the actress “over-rated” and defending himself.

Meryl Streep was applauded during the opening monologue at the Academy Awards on Feb. 26, 2017 in Hollywood, California. Photo: Getty Images