German Chancellor Angela Merkel looked at the "surreal, haunting" scene in a village devastated on Sunday. She pledged quick financial assistance and a renewed political focus on climate change, as the death toll from flooding in Western Europe rose above 180. 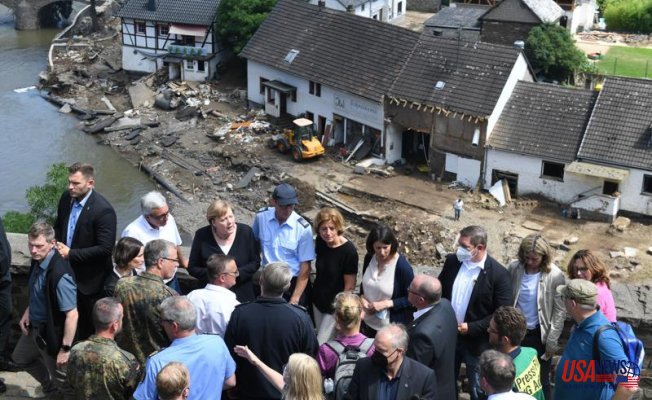 Merkel visited Schuld, a village in west Germany on the Ahr River's tight curve. Many buildings were destroyed or damaged by floodwaters Wednesday night.

Schuld's mayor said that no one was hurt or killed there. However, other areas were not so fortunate. One12 people died in the Ahrweiler, where Schuld is situated. Authorities claimed that some people were still missing, and they are concerned about the possibility of an increase in death tolls.

Merkel stated that she left Schuld partly covered in rubble and mud, but with a "real picture of, I have to say, the surreal, ghostly environment."

She said, "It's shocking -- I would almost call that the German language barely contains words for the devastation that's been wreaked," at a news conference held in a nearby community.

Merkel stated that authorities would work to "settle the world back in this beautiful area, step by step", and her Cabinet will approve a short-term and medium-term financial assistance program on Wednesday.

According to Olaf Scholz, Finance Minister, more than 300 million euros ($354 millions) will be required. He also said that officials should create a long-term rebuilding plan, which will take into account the experience of previous flooding.

Merkel, who will be stepping down as chancellor after a September election, said that Germany is able to manage the finances. "Germany is strong and we will stand up against this force of nature in both the short and medium term. We will do so through a policy that pays more attention to climate and nature than we have in recent years. This will also be required."

According to climate scientists, there is a clear link between extreme weather and global heating and that it is urgent to act on climate change.

Although scientists are unsure if climate change is responsible for flooding, they believe it has contributed to the increase in extreme weather events around the globe.

Merkel stated that "We must move faster in the fight against climate change", pointing out the policies set by Germany and EU to reduce greenhouse gas emissions. "But, the second lesson is that adaptation to climate change must be given great attention."

She said that while investing in climate change mitigation is costly, it is more expensive than failing to do so.

Merkel stated that although one flood is not a sign of climate change, if you look at recent loss events, decades, they are just more common than ever before -- so we need to make great efforts.

The rain stopped in the most affected areas in Germany, Belgium, and the Netherlands. However, downpours and storms continue elsewhere in central and western Europe. Saturday night was flooded in the German-Czech border region, in Germany's southeast corner, as well as over the Austrian border.

After the Ache River rose, around 130 people were evacuated from Germany's Berchtesgaden. One person was reported to have been killed, and Berchtesgaden's rail line was shut down.

The Berchtesgaden region is also home to the Koenigssee sliding track, which has been hosting major international bobsled and skeleton events for over 50 years. Large sections of that track were damaged, and parts of the concrete chute were turned into rubble from the rushing waters.

Late Saturday night, a flash flood struck the Austrian town Hallein. However, there were no reports of any casualties. Further west, floods struck Kufstein. In several areas of Austria, heavy rains and storms caused severe damage.

According to RTBF, soldiers and firefighters searched Sunday for survivors or bodies in the eastern Belgian city of Pepinster. The search for survivors and bodies has been limited to the few houses that remain.

Many more homes could fall because of the unstable ground. Olivier Jiust, a firefighter, said that "We must be careful with each step we take."

Pope Francis offered prayers for flood victims in support of the "efforts by all to help those who have suffered great harm."

He said, "I express my deepest sympathy to the people of Germany, Belgium, and Holland, which were devastated by the flooding," Sunday, his first public appearance before the faithful at St. Peter's Square since major surgery. "May the Lord comfort and welcome the relatives of the deceased."

For a long time, residents in devastated areas will need support and comfort.

"This flood will leave scars for the people of Schuld -- scars you don't remember, that can't been overcome, because our life changed from one to the next," Mayor Helmut Lussi stated, breaking into sobs.