First lady Melania Trump has been reluctant to take on the traditional trappings of her role. More than a month after President Donald Trump moved into the White House in Washington, D.C., his wife continues to live in the family's luxury penthouse... 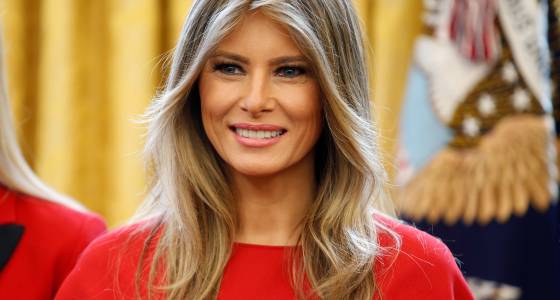 First lady Melania Trump has been reluctant to take on the traditional trappings of her role. More than a month after President Donald Trump moved into the White House in Washington, D.C., his wife continues to live in the family's luxury penthouse apartment in New York City and ignore expectations about how she will fit into the new presidential administration.

Melania Trump has so far "said little publicly about what she expects or wants from the cooking and entertaining staff," The New York Times reported this week. "Without a hands-on first lady, they're just pumping out food and seeing what the reaction is," explained presidential food writer Adrian Miller.

Melania Trump is a former model who enjoys eating healthy. Her husband, on the other hand, is overweight and likes to indulge in burgers and overcooked steaks. It's unclear how their preferences will play out in the White House when no one is directing the staff about what food to serve the many elite guests who stop by the hollowed home.

"Usually, the food suffers when the first lady is uninterested," Miller said.

The Trump White House held its first formal dinner Sunday and the black-tie Governors Ball was said to go off without any problems. On the menu was East Coast salmon, roasted rib-eye steaks and Boston cream pie with vanilla ice cream.

To be sure, Melania Trump has taken care to give the White House staff some marching orders. She wants to keep the White House garden Michelle Obama founded during her time at the historic home.

"As a mother and as the first lady of this country, Mrs. Trump is committed to the preservation and continuation of the White House Gardens, specifically the First Lady's Kitchen Garden and the Rose Garden," she said in a statement earlier this month.