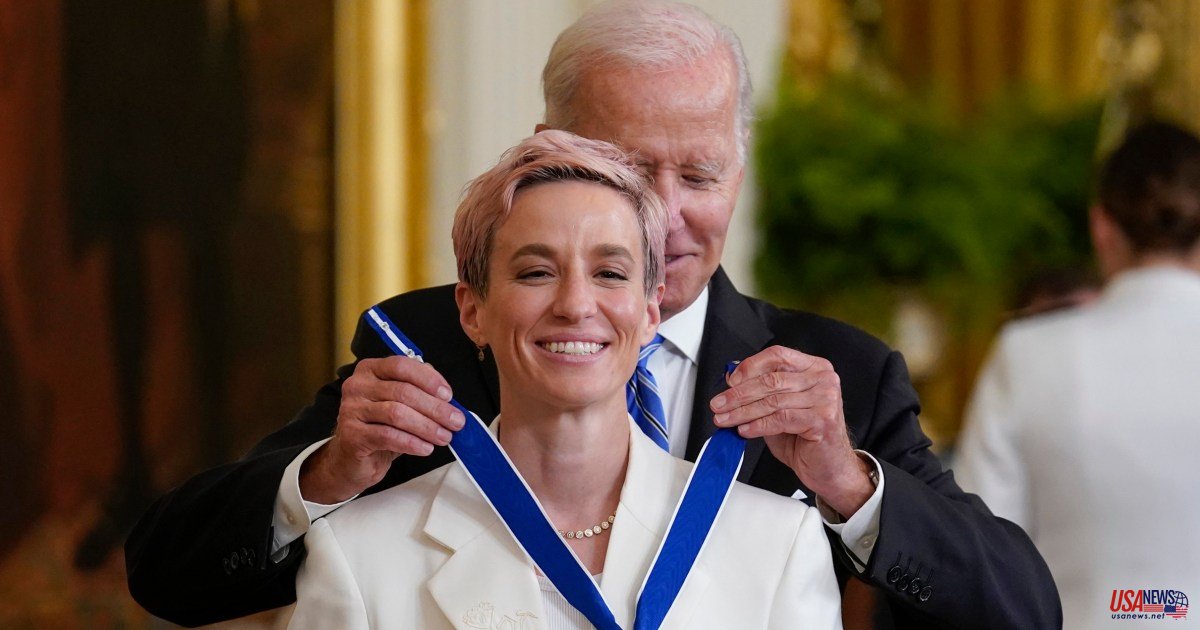 On Thursday, President Joe Biden awarded Megan Rapinoe, an American soccer player, the Presidential Medal of Freedom. This is the highest civilian honor in the country.

Rapinoe was one of 17 recipients. She was also among Simone Biles (a fellow Olympian), Denzel Washington, an Academy Award-winning actor, and Sen. John McCain (an Arizona Republican who died in 2018).

Rapinoe was the first player to win the award, and she is also one of six female coaches or athletes.

Biden stated that Megan was a champion for the essential American truth that all people are entitled to dignity and respect at every stage of the World Cup title to Olympic golds. "She led the change that brought about the greatest victory for any player on our soccer team, or any soccer team, equal pay for women."

Rapinoe is a U.S. Women's National Team member since 2006. She has helped the team win two Olympic golds and two World Cup championships.

Rapinoe, along with four other U.S. Women's National Team athletes, filed an Equal Employment Opportunity Commission complaint in 2016 against the U.S. Soccer Federation. They alleged gender discrimination. Rapinoe was one of 28 team members to file a similar lawsuit in 2019. They cited years of gender discrimination in pay and medical treatment, as well as the overall workload.

In February, the five-player group reached a settlement agreement with the U.S. Soccer Federation. They received $24 million in compensation and agreed to pay equal wages for all friendlies and tournaments.

Rapinoe said that the settlement was a major win for them.

U.S. Soccer announced in May that it had reached a collective bargaining deal with both the men's and women's national soccer teams to close the gender pay gaps.

Rapinoe is the second openly LGBTQ American to be awarded the Presidential Medal of Freedom. She follows comedian Ellen DeGeneres and gay rights activist and politician Harvey Milk and playwright Tennessee Williams.

Rapinoe, who was named as a medal winner last month, stated that he is humbled and honored to have been chosen by President Biden for the award. He also expressed his gratitude for being chosen. Emma Lazarus said, "Until we all are free, we're all bound."

In 1945, the Truman administration established the Presidential Medal of Freedom to honor civilian efforts in World War II. In 1963, President John F. Kennedy revived this tradition by honoring leaders in American culture, innovation, and arts.