Breitbart News Network, the far-right media outlet that heralded President Donald Trump's rise and was once led by his top White House strategist, is owned in part by a wealthy conservative family that poured millions into propelling Trump into office, the... 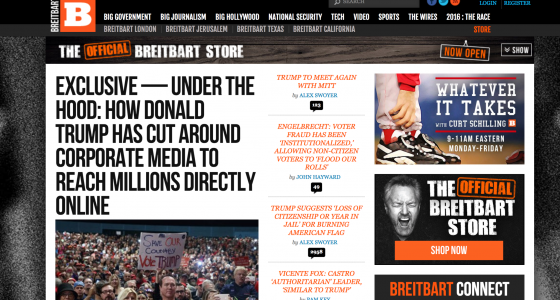 Breitbart News Network, the far-right media outlet that heralded President Donald Trump's rise and was once led by his top White House strategist, is owned in part by a wealthy conservative family that poured millions into propelling Trump into office, the company's chief executive acknowledged Friday.

The site's financial backing from the Mercers - long rumored but never officially confirmed - further cements the family's status as some of the most influential financiers of the Trump era. The news comes as Breitbart has enjoyed a higher profile within the White House press corps.

Larry Solov, Breitbart's president and CEO, shared the company's ownership information with a panel of congressional journalists as part of a process to get Capitol Hill press credentials for Breitbart reporters.

Solov said that he is also an owner of the company. The largest share is owned by Susannah Betgram Breitbart, the widow of site founder Andrew Breitbart, who died in 2012.

Solov would not reveal which members of the Mercer family were investors.

"I can't say more than 'the Mercer family,' " Solov told the Standing Committee of Correspondents, the group tasked with approving credentials that grant reporters access to certain areas in the Capitol restricted to the general public. "That's all I can specify right now."

Solov also said that the site's former executive chairman, White House senior strategist Stephen Bannon, resigned from the company in a phone call after the election.

But Solov said he could not provide documentation of Bannon's separation from Breitbart.

'It wasn't even a question:' The calculation for pulling advertising off Breitbart Abha Bhattarai

A couple of weeks ago, staffers at Klipfolio received word that their software company's ads were being displayed on the alt-right site Breitbart News Network, alongside stories that supported White Supremacy, misogyny and homophobia.

A couple of weeks ago, staffers at Klipfolio received word that their software company's ads were being displayed on the alt-right site Breitbart News Network, alongside stories that supported White Supremacy, misogyny and homophobia.

Neither White House officials nor a spokeswoman for Breitbart and the Mercers returned requests for comment.

The Los Angeles-based Breitbart News, founded in 2007, has been criticized for airing inflammatory stories about immigrants and refugees and promoting nationalist views. Bannon once touted it as a "platform" for the alt-right, a movement whose adherents are known for espousing racist, anti-Semitic and sexist points of view.

Breitbart is one of many projects that the Mercers undertook with Bannon in the past six years as they expanded their political influence on the right.

The family's profile started to rise in 2010, when Robert Mercer became co-chief executive of the Renaissance Technologies hedge fund and began directing his wealth into Republican campaigns. Last year, he and his wife, Diana, gave nearly $3.4 million to Trump's campaign, the Republican Party and a family super PAC that backed the businessman's presidential bid and was run by Kellyanne Conway, now a top White House adviser.

Milo Yiannopoulos, the incendiary writer who helped make Breitbart News a leading organ of the alt-right, resigned from the news organization Tuesday after a video of him endorsing pedophilia resurfaced online over the weekend.

Yiannopoulos has been a flame-throwing provocateur whose writing has...

Milo Yiannopoulos, the incendiary writer who helped make Breitbart News a leading organ of the alt-right, resigned from the news organization Tuesday after a video of him endorsing pedophilia resurfaced online over the weekend.

Yiannopoulos has been a flame-throwing provocateur whose writing has...

Much of the family's political investment strategy is driven by their middle daughter, Rebekah, who has quietly directed millions into an array of conservative groups and causes.

Under her leadership, the Mercer family foundation gave nearly $35 million to Washington think tanks and state policy groups between 2009 and 2014, according to records compiled by The Washington Post and GuideStar USA.

Among the major beneficiaries have been the Media Research Center, a conservative media watchdog group, and the Heritage Foundation.

The family also financed a production company that produced films such as "Clinton Cash," a documentary based on the book by conservative author Peter Schweizer, as well as a data science company, Cambridge Analytica, that worked for Trump's campaign. Cambridge's British parent company, SCL Group, is now ramping up its efforts to secure government contracts.

Before joining Trump's campaign, Bannon effectively served as Rebekah Mercer's political adviser, according to people familiar with his role. He was also executive chairman of Breitbart, where he hosted a regular satellite radio show where his guests included Trump and others who have become officials in the administration.

Rebekah Mercer played a role in his hiring by Trump, whom she urged last summer to shake up his campaign leadership.

When Bannon joined Trump's campaign, Breitbart announced that he was taking a temporary leave of absence and would rejoin the company after the election.

On Friday, Solov said Bannon currently has no editorial or financial relationship with Breitbart.

But the committee asked Solov to provide a document or statement from Bannon attesting to his separation from the company.

"We're trying to help get you credentials," said Billy House of Bloomberg News, chairman of the committee. But House added: "We're just a little concerned - and I'm not saying this is the case - but what you're telling us could also be a way to evade actually having Mr. Bannon state that he is no longer with Breitbart."

Solov said he could not agree to the committee's request.

"I can only do what I can do. I don't have control over Mr. Bannon," Solov said.

Since Trump took office, Breitbart has enjoyed favorable access to the administration at a time when the president has been denouncing the media as "the enemy" of the American people. But the outlet has also run stories critical of Trump, including pieces that hammered him for not cracking down on undocumented immigrants brought to the United States as children.

On Friday, Solov told the congressional credentialing panel that Breitbart correspondents deserve official passes that will give them regular access to Capitol Hill.

The Standing Committee has awarded credentials to both liberal and conservative news organizations, as well as mainstream outlets, but members said Friday that they have concerns about Breitbart given the lack of public knowledge about its finances and management structure.