The iconic Magic Castle in Los Angeles was shrouded in mystery Friday night after a body was found inside a closet. While police suspected the incident to be an apparent suicide case, a Hollywood police spokesman told the New York Daily News that... 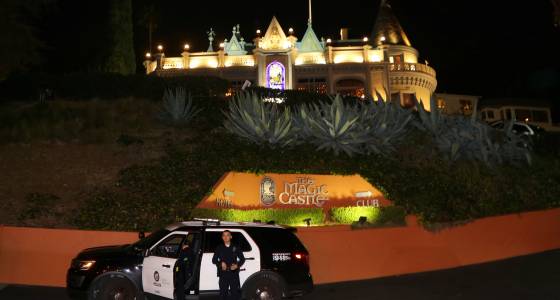 The iconic Magic Castle in Los Angeles was shrouded in mystery Friday night after a body was found inside a closet. While police suspected the incident to be an apparent suicide case, a Hollywood police spokesman told the New York Daily News that foul play could not be ruled out immediately.

Police arrived at the exclusive Hollywood magician's club and fine dining restaurant and found the man's body with only his underwear and a bag over his head, TMZ reported, adding that it appeared the man, who is believed to be a magician, had hung himself.

The identity of the victim was not disclosed, and Hollywood landmark did not officially address the incident.

The Magic Castle, which opened in 1963, identifies itself as “the most extraordinary private club in the world where history, art, and elegance combine to make miracles,” according to its website.

The club only allows members or those who are either accompanied or invited by members. The club also follows a strict dress code that everyone has to adhere to.

One of the guests, Kelsey Peterjohn of Studio City, told the Los Angeles Times that she was looking forward to her first visit Friday to the castle but instead she was a witness to such an incident.

“There was a line kind of out the door of people waiting outside, and they were turned away,” she said. Peterjohn said she had planned to watch her friend, who was a magician, perform at a show but a worker at the building said the castle would be closed for "quite a while."

Several social media users reacted to the incident on Twitter.

In 2015, the Magic Castle found itself in legal trouble when the founder Milt Larsen and his niece Erika Larsen, the current president of the Academy of Magical Arts, got into a feud over the 5.5 percent royalty from annual food and beverage sales at the club.