Madness in the air at Northwestern after buzzer-beater vs. Michigan

Doug Collins, you can breathe again. Same for every Northwestern fan who pumped oxygen into Welsh-Ryan Arena on Wednesday night.The atmosphere in Evanston was electric, and the Wildcats responded with a crazy 67-65 victory over Michigan that ended with a... 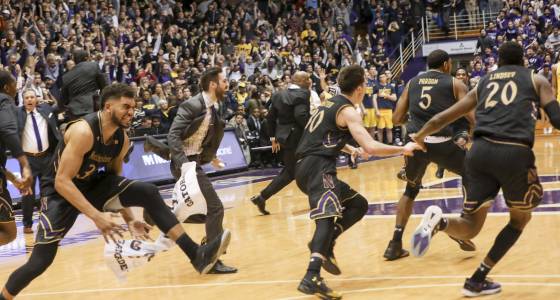 Doug Collins, you can breathe again. Same for every Northwestern fan who pumped oxygen into Welsh-Ryan Arena on Wednesday night.

The atmosphere in Evanston was electric, and the Wildcats responded with a crazy 67-65 victory over Michigan that ended with a pile of purple-clad students and players on the court.

With 1.7 seconds left, Nate Taphorn fired a full-court pass that center Dererk Pardon collected near the basket. His layup led to an uproarious celebration — even more so after the P.A. announcer bellowed, "Upon further review ... the basket is good!"

Pardon said assistant coach Brian James, an NBA veteran, told him to set a screen and then "go long and score the ball."

"When I saw the ball come out of Nate's hands," Pardon said, "I thought it was long. I thought it was going out of bounds. But as I caught it, I'm like: The rim is right there. I turned around and shot the layup."

The Pardon prayer answered, Northwestern surged into March in the most exuberant way possible.

And perhaps the best moment in program history.

Bracketologists could not agree on whether the Wildcats needed to win another game to end one of the saddest droughts in sports and make the school's first NCAA tournament appearance. Now that Northwestern has improved to 21-9 and 10-7 in the Big Ten, it appears there's no keeping these guys out.

Northwestern coach Chris Collins on the win over Michigan

What's wild is that Northwestern had never even practiced the final play. And Taphorn, the senior forward from downstate Pekin, had been haunted since Nov. 22, when he froze on an inbounds pass against Notre Dame, leading to a four-point loss.

"That goes through my mind just about every day," he said.

Originally Taphorn would have had to fire the baseball pass over a leaping D.J. Wilson. But after Michigan (19-11, 9-8) called timeout, it replaced Wilson with Mark Donnal, who did not do much to contest the pass.

"Putting a man on the ball this time backfired for us," Michigan coach John Beilein said. "But it was just a fantastic pass. Reminds me of Christian Laettner."

After Pardon's shot went through, NU coach Chris Collins thought of another hero from March Madness.

Northwestern player Nate Taphorn on the Wildcats' victory over Michigan

Collins said it was probably fortunate his father, Doug, was working the Celtics-Cavaliers game for ESPN because tight games like this cripple him. Collins eventually did find his wife, mother and kids to hug.

"Just a special night," he said, getting choked up.

Northwestern set a school record with its 21st win and locked in its first over-.500 Big Ten record since 1968.

Law came back to life after a monthlong slump, hitting 7 of 10 shots. Pardon had nine points and eight rebounds. The Wildcats turned it over 10 times in the first half but just twice in the second. Years from now, few will remember these numbers.

But everyone who witnessed it will remember the vibe.