Before the Lyons boys swimming and diving team won its second consecutive state championship Saturday, it needed a mid-meet, heart-to-heart team meeting.After nine events, the Lions were second in the team standings to rival Hinsdale Central by a score of... 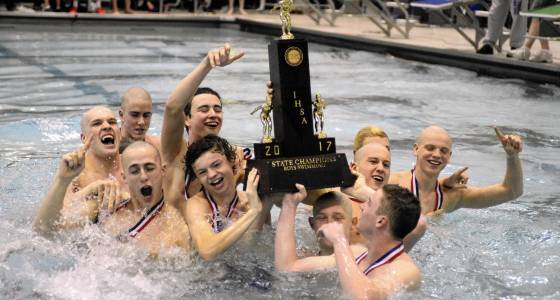 After nine events, the Lions were second in the team standings to rival Hinsdale Central by a score of 112-107.5. During the break after the 200-yard freestyle relay, Lyons coach Scott Walker rounded up his team with a simple message.

"We weren't swimming bad, it's just that the other teams were swimming well," Walker said. "We were trying to hold our ground. That kind of wasn't cutting it after awhile, so we had to have a refocus meeting and say, 'You guys want this, we're going to have to knock it up a notch, because it's not going to be easy.'"

Added junior Henry Claesson: "The second break after the 200 free relay, Coach Walker pulled us all aside and told us, 'Hey, you guys are a back-half team, you've got the next three, four events, you're in great position here. You guys have to put your heads down and finish the meet.'"

Lyons closed the meet with a third-place finish in the 400 free relay — consisting of senior Ryan Hammond, Matt Linden, Spencer Walker and Claesson — to clinch the program's second team title with 156.5 points, ahead of runner-up Hinsdale Central's 142. The Lions celebrated on the pool deck, and in the large Lyons contingent in yellow T-shirts erupted in the bleachers.

For Spencer Walker, the team's victory overshadowed any personal effort on his part.

"It's not about the one kid that can win, it's about what the team can do when they put it all together," he said. "We're lucky, just to have the team we have. We've been together since we were little, so we find it pretty funny that a lot of us on the team were at a summer club getting summer league championships to come to this meet and do something amazing."

Before Spencer Walker's crucial win in the 100 backstroke, Lyons got a number of vital contributions: Claesson finished third in the 100 freestyle (45.52), Walker was fourth in the 500 freestyle (4:27.99) and the 200 freestyle relay team of Hammond, Linden, senior David Rak and Claesson took second (1:24.34). In addition, Lyons senior Seamus Scotty finished fourth in the diving competition with a score of 477.75, giving the Lions 11 points in an event Hinsdale Central didn't have a competitor in the finals.

"I think when Henry held in his 100 free, Spencer held in the 500 and we held in the 200 free relay, that was big," Scott Walker said, "because then we were going in with Spencer's back, and Hinsdale didn't have a backstroker, so we were going to ride off his points going into the 400 free relay."

Lyons won its first state boys swimming and diving championship in 2016 with 146 points over runner-up Naperville Central with 122.

"The first one still hasn't hit me," Scott Walker said. "I keep telling people, I might be on a boat somewhere 10 years, 15 years from now, and I might just break down and cry."

Gregg Voss is a freelance reporter for Pioneer Press.