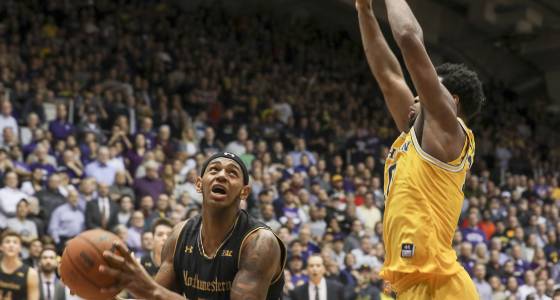 As a boy growing up in Cleveland, Dererk Pardon dreamed of one day playing wide receiver but Catholic Youth Organization weight limits prevented the 6-foot-2, 230-pound seventh-grader from lining up anywhere but offensive tackle.

That early position switch eventually steered Pardon to basketball but the football instincts never left — and, for Northwestern's sake, thank goodness they didn't.

With 1.7 seconds left Wednesday night at Welsh-Ryan Arena and the score tied against Michigan, Pardon pulled down a full-court pass from Northwestern teammate Nathan Taphorn like an All-Big Ten tight end and scored the game-winning basket in an epic 67-65 victory.

"I guess I have great hands,'' Pardon kidded. "As I caught it, I was like, the rim was right there. This was just amazing for us and our program.''

After Pardon banked in the layup, a wild scene unlike any Wildcats team ever had experienced inside the 65-year-old building unfolded. Teammates formed a human mound on top of Pardon, Northwestern coach Chris Collins hugged every assistant coach wearing a suit, once he was sure the shot counted, and students flooded the floor.

"The best moment ever at Welsh-Ryan Arena,'' junior Vic Law said, and nobody argued.

Northwestern player Nate Taphorn on the Wildcats' victory over Michigan

Before joining the jubilation on the court, Northwestern athletic director Jim Phillips composed himself long enough to put the scene in perspective for a member of press row.

"Now that's the way you go in!'' Phillips told me, referring to the NCAA tournament.

Indeed, it was a perfect 10th Big Ten victory for Northwestern, a fitting method to join March Madness, an extraordinary moment that gave the Wildcats a 10-7 league record that all but guaranteed they will be one of the 68 teams in the tournament field. Without consulting Jerry Palm and Joe Lunardi on deadline, Northwestern is in.

The Wildcats limped in having lost five of their last seven games but beating Michigan definitively moved them off the NCAA bubble. Four months after the Cubs ended 107 years of futility, the basketball program that is 0-for-78 in NCAA tournaments continued toward its own happy ending, a Chicago parallel Collins the Cubs fan embraces.

After Northwestern's biggest victory ever, for example, Collins announced plans to put Wednesday's Tribune sports section front comparing his 2016-17 team to the 1969 Cubs "in the cemetery.''

Northwestern coach Chris Collins on the win over Michigan

"When you're trying to do things really hard, it takes something exceptional,'' Collins said.

And yet it was Collins doing what came most natural that created this moment. As he huddled with his staff before the final timeout, several assistants suggested playing for overtime. But Collins listened to his gut.

"My instinct said no, we've got to go for it,'' Collins said.

So he asked trusted Northwestern assistant Brian James to draw up the winning play, which has no name and the Wildcats never ran once. All that mattered was Taphorn took the ball out under Michigan's basket and looked deep for Pardon, who remembered James' instructions after setting a screen.

When Taphorn released the pass he will relive at every Northwestern reunion for decades, Collins cringed.

"We told Taphorn, 'You can't airmail the pass' and when he threw it, I thought it was going long,'' Collins said. "But it was right where it needed to be. … Don't the Bears need a quarterback?''

Collins laughed, looking as exhausted as he was exhilarated in a purple T-shirt he changed into after players doused him in the locker room. They were the same players Collins challenged after Saturday's loss to Indiana. They needed to handle the pressure there was no use denying any longer, to finally acknowledge the purple elephant in the room.

"I had been skirting around it,'' Collins said. "But I just said anything good in life involves handling pressure.''

This was why Collins came back home to coach Northwestern. This was part of his promise fulfilled, and seeing Pardon beat the buzzer reminded the former Duke player and coach of Christian Laettner's famous 1992 shot in the NCAA regional final. Those stakes were greater, but try telling that to these Wildcats.

"This is the game I committed here for,'' said Law, who scored 18 points to share team-high honors with Bryant McIntosh. "We knew if we wanted to be different, this was the game we needed to take.''

A rowdy atmosphere from a sellout crowd of 8,117 gave Northwestern legitimate reason to call its outdated home court an advantage. In the student section, 21 shirtless males spelled out P-O-U-N-D-T-H-E-R-O-C-K-#-B-I-G-C-A-T-S with purple letters painted on their chests as two female students waved the giant cardboard heads of alums Seth Meyers and Stephen Colbert. In Section 211, actress Julia Louis-Dreyfus and husband Brad Hall, Charlie Hall's parents, buoyantly blended in with the rest of the Wildcats parents. From the rafters to the front row, fans jeered every questionable call and cheered every basket in a game that included eight lead changes. On every possession after Northwestern fell behind 60-58 with 5 minutes, 56 seconds left, the tension was palpable.

The anxiety levels remained high until Pardon leaped into the air with 1.7 seconds left and came down with a piece of Northwestern history, setting off a chain of events Collins called surreal.

"I just wanted to find my family,'' Collins said, choking back emotion. "Because it has been a great journey so far.''