U.S. Rep. Raja Krishnamoorthi, speaking to more than 300 people at his first town hall meeting Friday night, put out a call to action to help him let their voices be heard in Washington, D.C."Now is not a time to agonize. It's a time to organize around... 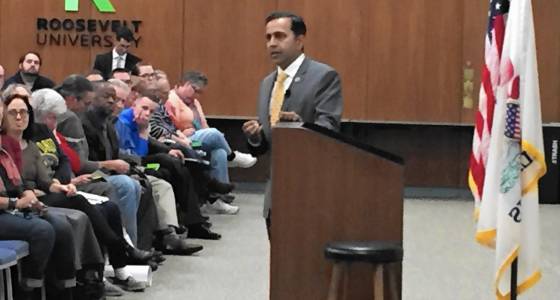 U.S. Rep. Raja Krishnamoorthi, speaking to more than 300 people at his first town hall meeting Friday night, put out a call to action to help him let their voices be heard in Washington, D.C.

"Now is not a time to agonize. It's a time to organize around these issues, forming and joining advocacy groups," said Krishnamoorthi, D-Hoffman Estates, speaking at Roosevelt University in Schaumburg. "In all of the challenges, a ray of hope is how people have gotten together and thrown sand in the gears of the excesses of the administration."

He called on constituents to step up and work with organizations and his office to make phone calls, develop forums, and send personal letters and postcards to share their concerns with their representatives.

"They hear you. They see you. I talk to colleagues privately on the other side of the aisle, and they're getting nervous," Krishnamoorthi said amid cheers and claps. "Keep doing what you're doing. It's essential that all of us have to speak up at this point."

Krishnamoorthi opened the town hall with his imitation of White House press secretary Sean Spicer, "Bring it on," and responded to more than a dozen questions from a crowd he later described as prepared and engaged during the 90-minute session. Questions touched on issues that ranged from the repeal of the Affordable Care Act to education vouchers, the Trump administration's alleged ties to the Kremlin and how the administration's immigration ban is undermining the country's national security.

"This issue," he said, then paused, getting teary-eyed and his voice cracking with his response. "I'm an immigrant. I came here when I was 3 months old. I think it's so important we're a nation of laws but also a nation of immigrants."

"On a lighter note, the Navajos were not immigrants, and they granted us all amnesty six months ago," he said, adding a little levity that drew chuckles from the crowd.

"We need comprehensive immigration reform," he said. "But we can't fan the flames of fear, bigotry and hatred that have engulfed us right now. We have to stand strong, and I hope you'll stand with us in this fight."

Sue Isaacson, 47, of Hoffman Estates, had asked the congressman what the Democrats were going to do because people like her are doing exactly what he's asking them to do, attending town halls, going to marches, and calling and mailing letters with their concerns to their representatives.

"He's very personable, and he's very open," Isaacson said, noting she is a former Republican who voted for Krishnamoorthi. "I was shocked at the questions from nuclear fusion to education and he knew it all. He answered all of our questions, and he was able to validate what we're feeling."

His emotion over a very personal subject of immigration, she said, demonstrates his humanity.

"He's an immigrant, and he is the epitome of what America is," she said of the small-business owner, who is raising a young family and whose children attend the same school as hers. "I was so angry this afternoon. If (President Donald) Trump takes away the First Amendment, what's next? But now I feel very hopeful.

"Everybody should go to a town hall."

He serves on the House Committee on Oversight and Government Reform, where he has called for an investigation into the Trump administration's ties to Russia, and the Committee on Education and the Workforce, where he said he is working to increase the minimum wage, establish parental leave and expand technical education.

He's also the ranking member and the top Democrat on the Subcommittee on Health Care, Benefits, and Administrative Rules for the Oversight Committee, where he said he is working to prevent the appeal of the Affordable Care Act. He said, "without a meaningful replacement, it would strip 20 million people of their health care. It would be an economic catastrophe for our country."

Other major issues he touched on during the town hall:

•Medicaid block grants: "I'm totally opposed to it, and it's a crazy idea," Krishnamoorthi said.

•Education Secretary Betsy DeVos: "I don't know if she will give your school more funding, but she may allow guns at your school in case of grizzly bear attacks," he said. "I'm a product of public schools. They are resource-challenged, and when you take those dollars away from public schools and send them to private schools, you're further starving the system," he said of his opposition to vouchers.

•Global warming: "China is eating our lunch with regard to renewable energy," said Krishnamoorthi, who sold solar technology in his business.

•Career education: "A K-12 education is no longer enough. It needs to be K-12-plus," he said. Private employers are coming together with community colleges, high schools, students and families, he said, to have students graduate not only with a degree or certification but also with an offer letter for a new job.

•Attacks on the credibility of major news media outlets: He called it "wrong" and "a serious breach of protocol that we have to advocate against." He said he was encouraged by the few "brave" people speaking out from inside the administration.

•The Russians: "The issue goes beyond politics. I feel that certain members are compromised, especially if there were talks with Russians and a quid pro quo. That theory is not completely crazy," Krishnamoorthi said. "It's time the House oversight committee do its job. I want all of you to write a letter to (U.S. Rep.) Jason Chaffetz (R-Utah, chairman of the House oversight committee). It has to be from your heart. He needs to hear from you."

•Affordable Care Act: "A lot of you in this room are leaders in your community, organizations, corporate sector. Ask your leadership to take a stand," he said. "When corporations take a stand on important issues, it provides cover for a lot of people on the other side of the aisle. If they take a stand, it would help."

•Minimum wage: He called the hourly wage "abominably low" and said he wants to see it gradually raised to $15 an hour.

•Repeal of the Johnson amendment, which prohibits tax-exempt organizations, such as churches, from engaging in political activity, including making endorsements: He is against its repeal and said, "I am evangelical American. I preach the value of America. … It doesn't matter the color of your skin, how you pray, who you love, how you dress or how many letters are in your name — there are 18 in mine."

Jennifer Tani, assistant vice president of community engagement at Roosevelt University, said she was pleased with the results of the town hall.

"I thought it went really well. It was a really engaged and exciting audience," said Tani, who offered the venue to the congressman during his swearing-in ceremony. "We like to see that type of exchange of ideas at Roosevelt University."

Elizabeth Owens-Schiele is a freelance reporter for The Courier-News.