WikiLeaks founder Julian Assange and Pamela Anderson recently spoke out about their close relationship amid rumors that the two have been dating. Speculation about the duo's romantic affair made the rounds after reports claimed the former "Playboy" model visited... 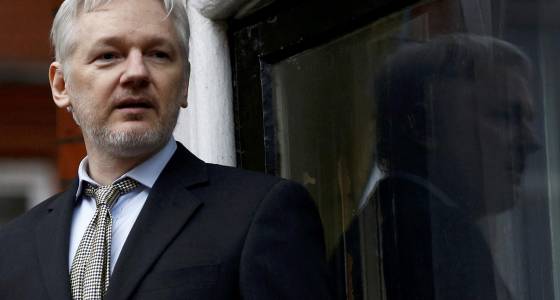 WikiLeaks founder Julian Assange and Pamela Anderson recently spoke out about their close relationship amid rumors that the two have been dating. Speculation about the duo's romantic affair made the rounds after reports claimed the former "Playboy" model visited Assange at least four times at London's Ecuador embassy, where he has been living for four years.

"I've spent more time talking to Julian than all of my ex-husbands combined!" Anderson said on "The Kyle and Jackie O Show" Thursday. When the Australian hosts pushed her to reveal more about their relationship, Anderson said: "It was never the intention to become romantic, it was just to join forces to do something important."

"Things happen, for sure," Anderson teased when Jackie O said: "It naturally happens."

Assange, who has been housed at the Ecuador embassy in London since June 2012 amid accusation of rape in Sweden, reacted to Anderson's feelings. He told the radio hosts: "She's an attractive person with an attractive personality. She's no idiot at all! Psychologically, she's very savvy."

This is not the first time Anderson spoke about Assange. She recently supported the 45-year-old on the rape charges against him on the Russian television show "The Underground."

"Sweden has these very progressive laws against sexual crimes," Anderson said. "It's almost too progressive, it's almost paralyzing. I'm going to actually start campaigning for men who have been victims of being accused of rape when they haven't actually done anything."

Earlier this month, reports surfaced that Assange could be evicted from the Ecuadorean embassy amid concerns of the cost of housing him. Assange maintains his innocence in the case and claims that accusations were a political ploy to extradite him to the U.S., where he fears he could face capital punishment for his electronic espionage. Most recently, Assange's WikiLeaks was accused of helping Russia influence the 2016 election by releasing hacked emails from Democratic officials. The Obama administration at the time blamed Russian hackers for the leaks.