John J. Stamos spent close to four decades working as a judge and as a Cook County prosecutor, rising to serve first as Cook County State's Attorney during turbulent times in the 1960s and then as a justice first on the Illinois Appellate Court and then... 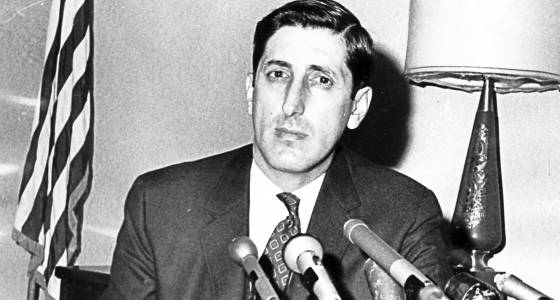 John J. Stamos spent close to four decades working as a judge and as a Cook County prosecutor, rising to serve first as Cook County State's Attorney during turbulent times in the 1960s and then as a justice first on the Illinois Appellate Court and then on the Illinois Supreme Court.

"He was a terrific prosecutor but even more so, he was just a terrific public servant," recalled Bernie Judge, the retired editor and publisher of the Chicago Daily Law Bulletin and a former Tribune city editor. "And he was never interested in promoting himself. He was only interested in doing an excellent job."

Stamos, 92, died of complications from pulmonary fibrosis on Jan. 28 at his home, said his son, James. A South Chicago native, Stamos had been a Northbrook resident since 1971.

Born in Chicago to Greek immigrants who came to the city in 1909, Stamos grew up in South Chicago and graduated from Bowen High School. He attended DePaul University and earned a law degree from DePaul's law school in 1948. He also served in the Army during World War II and was assigned to Belgium.

Stamos' first job after law school was working for the city as an assistant corporation counsel assigned to the jury court from 1951 until 1953. In 1954, he joined the state's attorney's staff. He worked in private practice from the start of 1959 until the end of 1960, when then-State's Atty. Daniel P. Ward tapped Stamos to run his office's criminal division. In December 1964, Stamos was promoted to be Ward's first assistant.

After Ward was elected to the Illinois Supreme Court in 1966, Stamos became Cook County's state's attorney. Almost immediately, Stamos was presented with a challenge in the state's attorney's office over whether he should personally prosecute serial killer Richard Speck, who had murdered eight student nurses not far from Stamos' own home, in South Chicago.

Despite the fact that such a prosecution could have meant elevated exposure — and thus, potentially, some personal political benefits — for Stamos, he insisted that one of his lieutenants, William J. Martin, handle the prosecution.

"I always thought John should have tried the case, but he couldn't be convinced otherwise. He was adamant that he wouldn't abdicate his duties running the state's attorney's office and (managing) 150 assistants to try one case," recalled Martin, co-author of "The Crime of the Century: Richard Speck and the Murders That Shocked a Nation." "He couldn't take himself away from the tremendous responsibilities he had to try one case, and it would have shown a lack of faith in his staff. And he was unstinting in the support he gave me."

Speck was found guilty after a trial of less than two weeks, and was sentenced to death, although he later was resentenced to 400 to 1,200 years in prison.

Martin said Stamos' best-known and most frequent saying was "do the right thing."

"He really inculcated it in us, and it meant everything. The moral standards in that office were absolutely unbelievable," Martin said. "He was a tremendous moral force in the state's attorney's office for everybody who worked for him, and he took young assistants who were right out of law school and turned them into experienced and ethical prosecutors and advocates. John was the most honorable, fair-minded human being that I've ever met."

"He drilled into us that no conviction is worth your (law) license," said Tuite, now retired and living in Florida. "He was very strong on that. And when you had a moral question, it was, 'What would John do?' He was a really honorable man — on the bench and his whole life."

Stamos' tenure in the state's attorney's office was not long. In February 1968, Democratic party slatemakers opted not to reslate Stamos as state's attorney, favoring instead U.S. attorney Edward Hanrahan. Working against Stamos were the fact that he'd never before sought elective office and that party bosses felt they wanted someone of Irish descent to run against the Republican candidate, then-Ald. Robert J. O'Rourke.

In response, Stamos announced that he would retire from politics and go into private law practice. He also rejected an offer from Democratic slatemakers to become the party's nominee for Illinois attorney general.

Several months later, however, Stamos accepted a judicial nomination to serve on the state Appellate Court's First District, and he won election to the post in November 1968. Stamos won retention elections in 1972 and 1976 and was considered for a federal judgeship in Chicago under President Jimmy Carter.

Stamos ran unsuccessfully in 1980 in a crowded race for an Illinois Supreme Court seat. The winner, Seymour Simon, had been the Cook County Board president who had backed Stamos as state's attorney almost a decade and a half earlier.

And in 1988, after Simon announced plans to step down from the state high court before the end of his term, Stamos beat out 25 other contenders — including four other Illinois Appellate Court justices — to win appointment by Supreme Court justices to the vacancy.

While on the state Supreme Court, Stamos authored what is known as the Himmel decision, which mandated that lawyers report all forms of lawyer misconduct to the appropriate disciplinary authority. The decision was aimed at making lawyers "better lawyers," Judge said.

Stamos initially planned to run for a full 10-year term to the Cook County seats on the Illinois Supreme Court in 1990, but in 1989 announced that he would retire instead.

"I think he felt a natural appreciation for the way the law worked and the way it brought order and hopefully justice on occasion," his son said. "I think it also gave him an opportunity to excel beyond what he ever dreamed as a kid in South Chicago."

After retiring, Stamos and his second wife, Mary "Daisy" Stamos, traveled widely. He also enjoyed painting, and he took on some legal assignments, including arbitrations, in his son's law firm, his son said.

Goldsborough is a freelance reporter.