Jimmy Kimmel on the Oscars: 'It was the weirdest TV finale since 'Lost''

Oscars host Jimmy Kimmel shared his perspective on the show's best-picture gaffe during his Monday monologue on "Jimmy Kimmel Live !""As I'm sure you've at least heard, 'La La Land' was simultaneously somehow the biggest winner and loser... 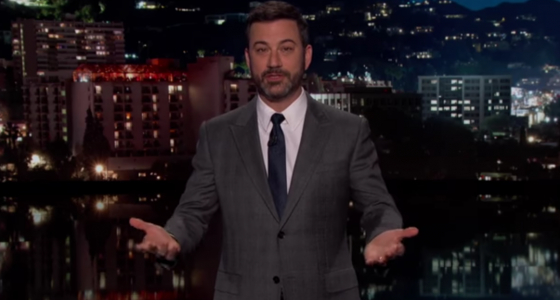 Oscars host Jimmy Kimmel shared his perspective on the show's best-picture gaffe during his Monday monologue on "Jimmy Kimmel Live !"

Presenters announced "La La Land" as the best picture winner at Sunday's Academy Awards, though "Moonlight" was the actual winner. Warren Beatty and Faye Dunaway had been given the best actress envelope to open instead of best picture. The accounting firm responsible for the integrity of the awards has taken responsibility for the error and apologized to all involved.

"It was the weirdest TV finale since 'Lost,'" Kimmel cracked.

He said the plan had been for him to end the Oscar show in the audience, seated next to Matt Damon, when rumblings began that there'd been a mistake.

"Moonlight" won the best picture Oscar after a botched announcement threw the ceremony into chaos.

"Moonlight" won the best picture Oscar after a botched announcement threw the ceremony into chaos.

"We're sitting there and we notice some commotion going on," Kimmel said. "And Matt says, 'I think I heard the stage manager say they got the winner wrong.' ...So you just kind of figure, well, the host will go onstage and clear this up. And then I remember, oh I'm the host."

Kimmel said it was "mass confusion" when he got onstage and no one seemed sure what to do. Then Denzel Washington, sitting in the front row, got Kimmel's attention and shouted, "Barry!"

"Eventually I figured out that Barry Jenkins, the director of 'Moonlight,' is standing behind me and Denzel wanted me to get him to the microphone to make a speech, which makes sense," Kimmel said. "Thank God Denzel was there to make sense."

After ending the show, Kimmel spoke to Beatty backstage, who showed him the envelopes. Dunaway, "made quite a getaway," Kimmel said, leaving immediately after the show.

"Have any of you here ever hosted the Oscars before?" Kimmel joked with his Monday night audience. "Well, except for the end - it was a lot of fun."