Jimmy Butler puts his stamp on closing time: 'He just made winning plays' 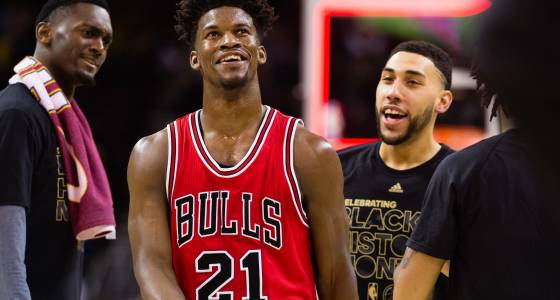 In Saturday's victory, Butler missed his first five shots, had three points at halftime and finished with a triple-double of 18 points, 10 rebounds and 10 assists.

"That's an elite player," Dwyane Wade said. "It's not going to be a perfect game all the time. You have to know how to be great, to make a difference. I saw it earlier in the season where he had some of those bad games and in the fourth quarter, he still made big shots. A lot of guys don't have the mental toughness to do that."

Butler has been a big part of the better ball movement that has defined recent victories. The Bulls tied their season high with 34 assists against the Cavaliers, their second straight game over 30.

"He just made winning plays, the right play. And that's what it's about," coach Fred Hoiberg said. "We talk about moving the basketball and trusting your teammate. And Jimmy's obviously a huge part of that."

"I didn't put Cam back there in the second half because he still has a lot to learn," Hoiberg said. "His minutes will increase as we move along. I thought he played well."

"It's rare for a mid-major school to have two guys in the NBA, much less the same team," Canaan said. "So it's pretty dope for the school to get some recognition."

Payne, who left after his sophomore season, arrived the year after Canaan finished his four-year run.

"It's kind of funny," Payne said. "Jerian (Grant) was like, 'Who scored the most in two years?' It was cool. I'm happy to be here with him and just make the most of it."